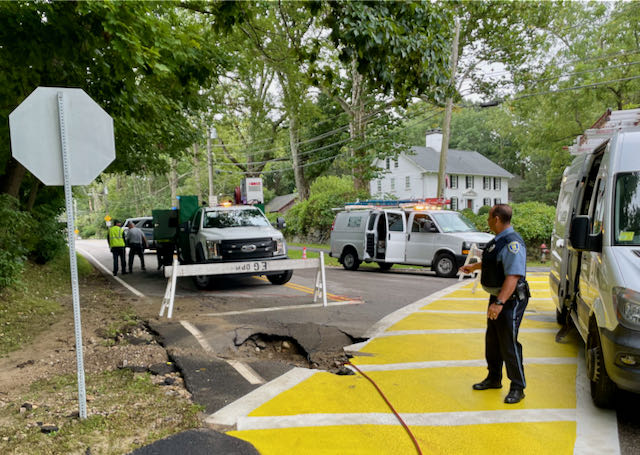 Traffic is being detoured

A water main under Cedar Avenue just east of the Kenyon-Middle intersection broke Friday afternoon around 2 p.m., prompting detours away from the busy roads just as school was letting out at the middle and high schools. The break caused a roughly 9-foot by 6-foot patch of road to cave in at the site. By 3 p.m., water service remained off to customers on Cedar Avenue from Middle Road to Cole Middle School.

According to Kent County Water Authority executive director Dave Simmons, the work now is to excavate and remove the water that’s built up, then repair the pipe. He said water service could be restored within a few hours. Once the pipe is repaired, they will patch the road.

Water could be brownish for residents in the area for the next several hours, Simmons said. “The water volume was so high, it stirred up the sediment in the pipes,” he said.

Simmons said KCWA has a “very, very active replacement program” for older water mains. The oldest water mains are cast iron. In the 1970s, he said, they replaced water mains with “transite,” a cement pipe that can become brittle with age. Today they use ductile iron pipes, he said.

You can find out more about Kent County Water Authority HERE.