The Town Council will meet in a special session Saturday, Dec. 1, to vote on firing Town Manager Gayle Corrigan. The meeting will start at 9 a.m. with an executive session to discuss Corrigan’s termination, as well as the possible appointment of one of five town department heads* to the temporary position of acting town manager. They will also discuss in executive session terminating acting Fire Chief Kevin Robinson and the appointment of Capt. Tom Mears as acting Fire Chief. 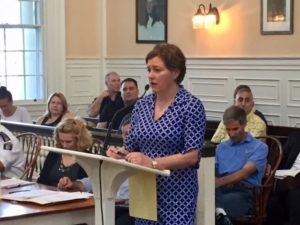 The Town Council has been in office only since Monday evening. At a special meeting Thursday night, they will vote on terminating Town Solicitor David D’Agostino and hiring the law firm Ursillo, Teitz and Ritch as solicitor. (Andy Teitz has been working for the town Planning Department since 2017. Mike Ursillo has a background in municipal law. The law firm has an open letter of engagement with the town, easing their hire, said Town Council President Mark Schwager Wednesday.)

The rapid-fire personnel changes follow campaign promises from all five council members that they would get rid of Corrigan if elected. Corrigan was hired in June 2017 by the previous council. Schwager is the only member of the current council who sat on the previous council – he voted “no” on Corrigan’s hire in June, again in November and yet again in June 2018.

Also on the agenda Saturday is a plan to hire a consultant to work with the acting town manager. The qualifications for the position are outlined here: RFQ for Operations Consultant.

Schwager said Wednesday the consultant would help run the finance department – Finance Director Linda Dykeman, a close associate of Corrigan’s, resigned shortly after the election; Corrigan had been filling that role in the interim – as well as overall operations for the town. That individual would also, depending on the outcome of the vote on Corrigan, help organize the search for a new town manager.

Schwager said the highly unusual Saturday meeting was being held because “we decided to bring this issue up as quickly as possible, reviewing our staff for the new council.”

The meeting will take place in Council Chambers at Town Hall.