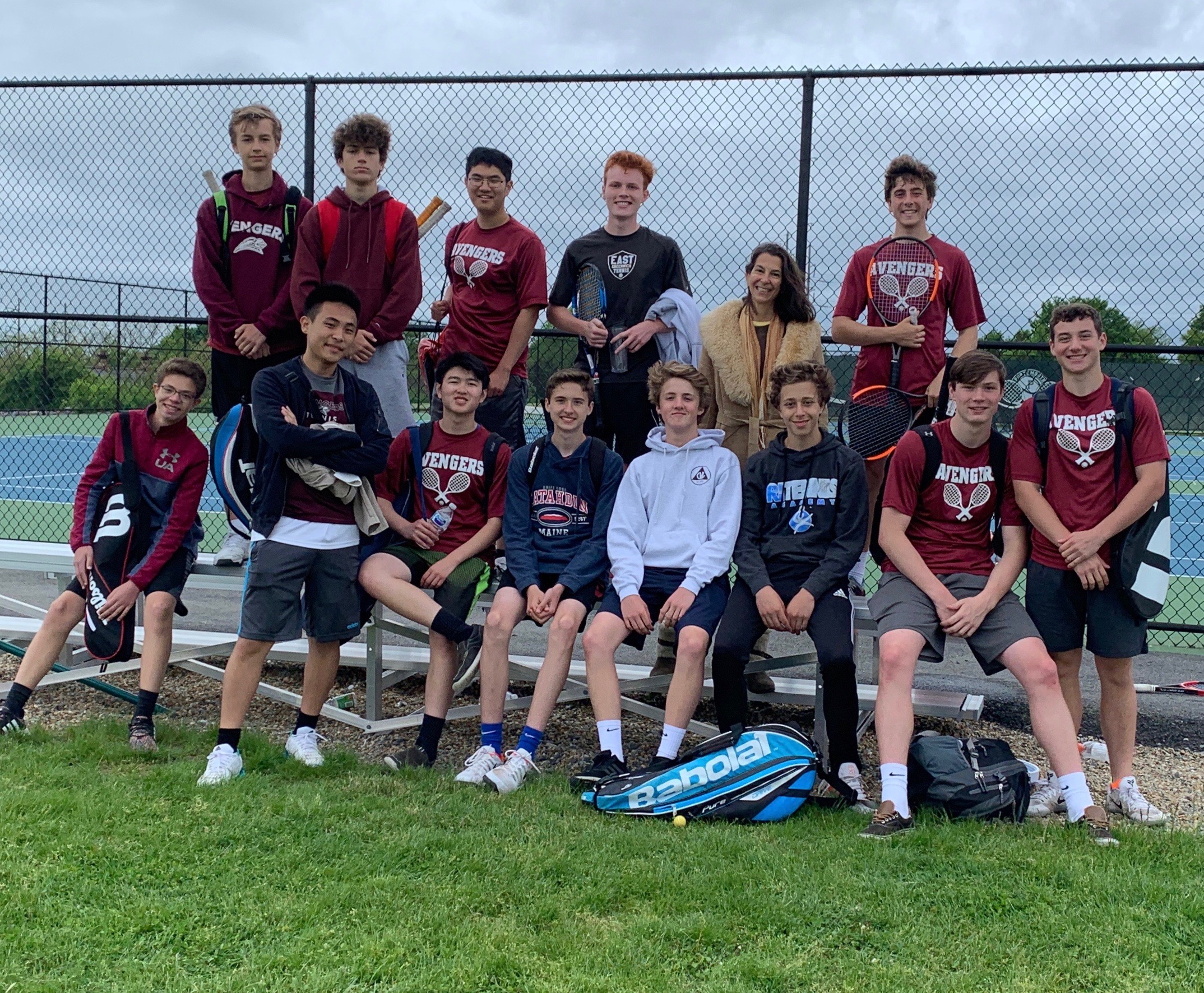 “Such a great group of young men,” said Coach Marisa Salvator. “I have had so many wonderful teams here at EG. This one was special.”

That specialness came, in part, because the season didn’t start out looking so great, with a few strong players from last year opting not to play a spring sport or to play the new varsity sport Ultimate instead.

“It galvanized us and made us a heck of a lot stronger,” Salvator said. “There is so much joy in leading players who really want to be there.”

It helped that several freshman joined the team, including Troy Caron, who ended up playing #1 singles, Hunter Lange, who held down the #4 singles spot, and “the Jakes,” as Salvador called them, Jake L’Houillier and Jake Shunney, who earned the #2 doubles spot. 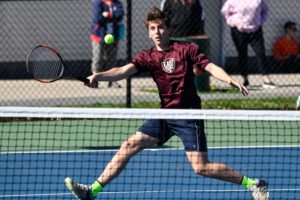 Salvador credited captains Alexander Sack and Daniel Sun for motivating the team and leading the warm ups. Sack finished the season at #2 singles with a16-0 record, while Sun became the ultimate doubles partner.

“Daniel is such a smart player,” said Salvador. “I can pair him with any partner and feel good about their chance of working well together.” His doubles record for the season was 13-1.

Another team standout was senior Nils Fimmer, who played #3 singles this year, Salvador said. “He has speed, strength, strong serve, baseline and net play. He can hit top spin, flat, slice, all equally well and the mix of that bag often frustrates his opponents into submission.”

Coach Salvador had nothing but praise for the #1 doubles team of juniors James Harwood and Alan Zhang.

“Having a formidable #1 doubles team can really set the tone for the whole squad,” she said. While often Harwood and Zhang were the first to win during a match, in the state finals, theirs was the deciding win.

“It was picture perfect,” said Salvador. “A big forehand from Alan leading a smashing overhead over the fence from James.”

“This depth is what helped our team have such great success overall, where all the pressure was not on the top few guys of the team,” Salvador said. She said while freshman Yehia Keder and Liam Salisbury spent most of the season in exhibition, she anticipated they would be in the mix for a spot in the roster next year. 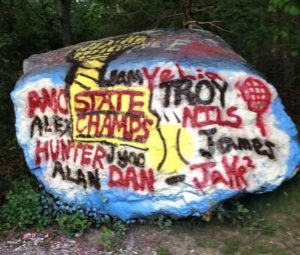 The rock decked out for the tennis team. Photo credit: Michael Sack

Tennis can be as much a mental game as a physical one. This season, Salvador decided to take on that mental component.

“Instead of serves and forehands, my bigger focus or theme for the season was mindfulness,” she said. “We used breathing and adopted the Seed Mantra, Sat Nam: within this seed is contained all the knowledge of a fully grown tree.”

In other words, she said, the truth is within you.

Heady stuff for a bunch of high school boys and Salvadore admitted they would get a little restless, but she said the discomfort was part of the point.

“Imagine our bus heading over the bridge to go to semifinals in Newport, and the whole bus with arms raised above head, eyes focused on the horizon on the water, and players chanting loudly, ‘sat nam’ in unison,” said Salvador. “It lasted a little longer than they were comfortable with but that is part of the exercise, staying still and calm in the midst of discomfort. We parallel that with the uncomfortable feeling of a match slipping away.”

The practice seemed to work. The team, unbeaten all season, faced more of a challenge in the playoff matches but managed to stay focused and win.

Salvador credited Larry Sack, father of Alex, for initiating tennis enrichment programs at EG schools, starting with kindergartners. She said she was also grateful for all the tennis families and former players who came to support the team.

Here are the scores from the championship match: