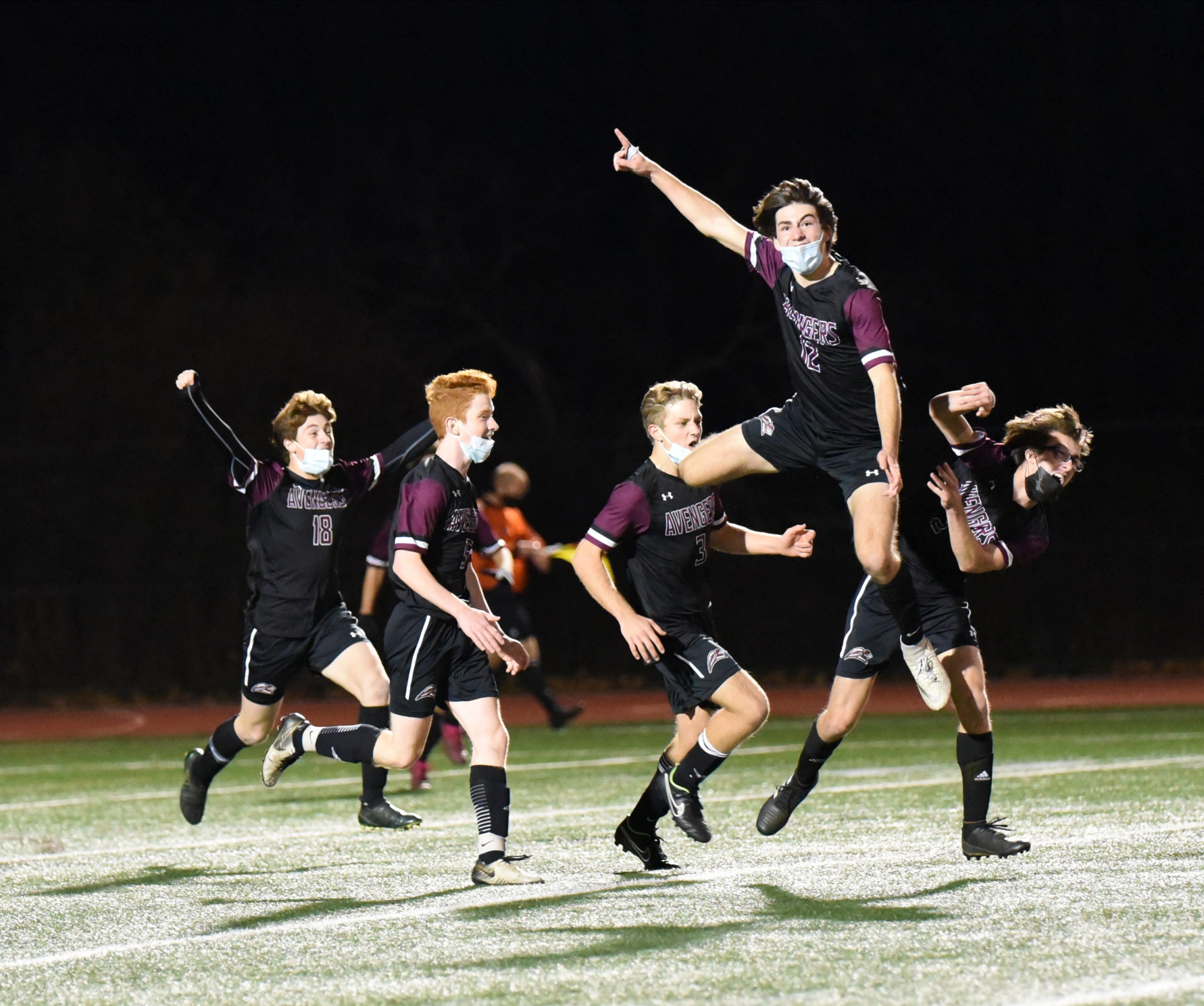 Above: Andrew Mega and teammates celebrate after what turned out to be the game-winning goal in overtime against Mt. Hope in the state DII final Saturday. Photos by Chuck Nadeau. Find all his photos at chuckn.com.

Andrew Mega heads the ball into the goal at the start of the second overtime, off a cross from Ethan Fain.

They did it – after more than a decade of playing together for many of them, the EG Boys Soccer team got to finish this most unusual pandemic season by winning the DII state championship against Mount Hope Saturday at the Johnston High School turf field.

“It was the greatest soccer moment of my life,” Mega said after the game. Remarkably, his sister, Alex, scored the winning (and only) goal of the EG Field Hockey DI championship only hours earlier, also in overtime (read about that game HERE).

“That was a very nice goal. We worked on those crosses every day. Andrew got up there and he made it,” said Coach Pat McGuirl. “His sister apparently did the same thing … so it was pretty cool.”

In many ways, Saturday’s final was a battle of the goalies, with both EG’s Carter Andrews and Mt. Hope’s Matthew Terceiro both pressured throughout the game.

“It’s been a tough season all year, but my defense has really done a good job all season of not giving me shots. Today I just had to step up and do what they’d been doing for me all season.

“Carter played well,” McGuirl said. “We talked about how it was important for him to have a good day. He was super focused on not giving up a goal in the playoffs.”

There were a couple of injures for EG players during the game – early in the first half, Max Matkasyan banged up his knees in a fall. And Mega strained his hamstring a couple of minutes after scoring and sat out the final couple minutes of the game.

For McGuirl, who has been coaching in EG for 20 years, it was a great end to a season full of uncertainty because of the pandemic.

“We had a system every day. The kids come out; we line up all the balls, we wash them down, we spray them. We stay apart. We just tried to follow the rules the best we could, with the masks and everything,” he said. “I couldn’t be prouder of this bunch of kids, especially the seniors.”

Aydin Kocak kicks the ball away from the EG goal.

EG goalie Carter Andrews makes a save early in the second half.

Max Matkasyan before he was benched after cutting his knees in a fall.