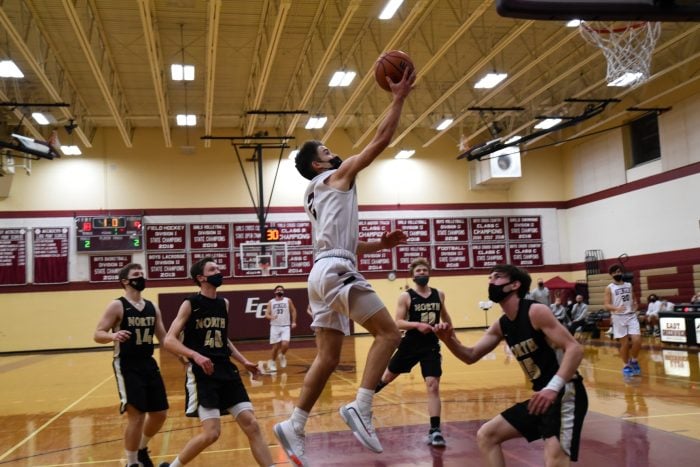 Above: Jack McMullen goes up for a baseline layup. Photos by Chuck Nadeau. Find all his photos at chuckn.com.

Well, all good things must come to an end. That’s what happened Tuesday night. EG lost in a non-league game to North Kingstown 59 to 49, the Avenger’s first loss of the season. But don’t let that score fool you.

Both teams came to win this one, and they came out swinging. Right from the tipoff you could tell. If there was one thing both teams had in common, it would be . . . adrenaline. It was flowing like a river.
The first quarter saw a lot of shooting from both teams, but the inside of the net didn’t see the ball much. That adrenaline works both ways. End of the first quarter saw EG up by 11, 20 to 9.

The second quarter saw mostly the same with the pace coming down to a manageable level. End of the half had the score tied at 37.

I won’t bore you with the third, just read above about the start of the game. It boiled down to the fourth. Both teams started shooting and the pace made my neck sore from following the ball. With 6 minutes and 56 seconds left, the score was 41 to 41. Then NK hit for a couple in a row to go up and with time running out EG had to intentionally foul to cause the final of 59 to 49 for NK.

The boys will play in D2 quarter finals playoffs Monday at home against the winner of the game between Johnston and Coventry this weekend.

Andy Plympton has his vision blocked.

Andy Plympton gets fouled putting one up from behind the net.

Dan Prior makes an easy layup.

Andy Plympton attracts a crowd at the net. 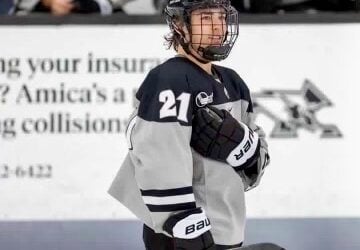