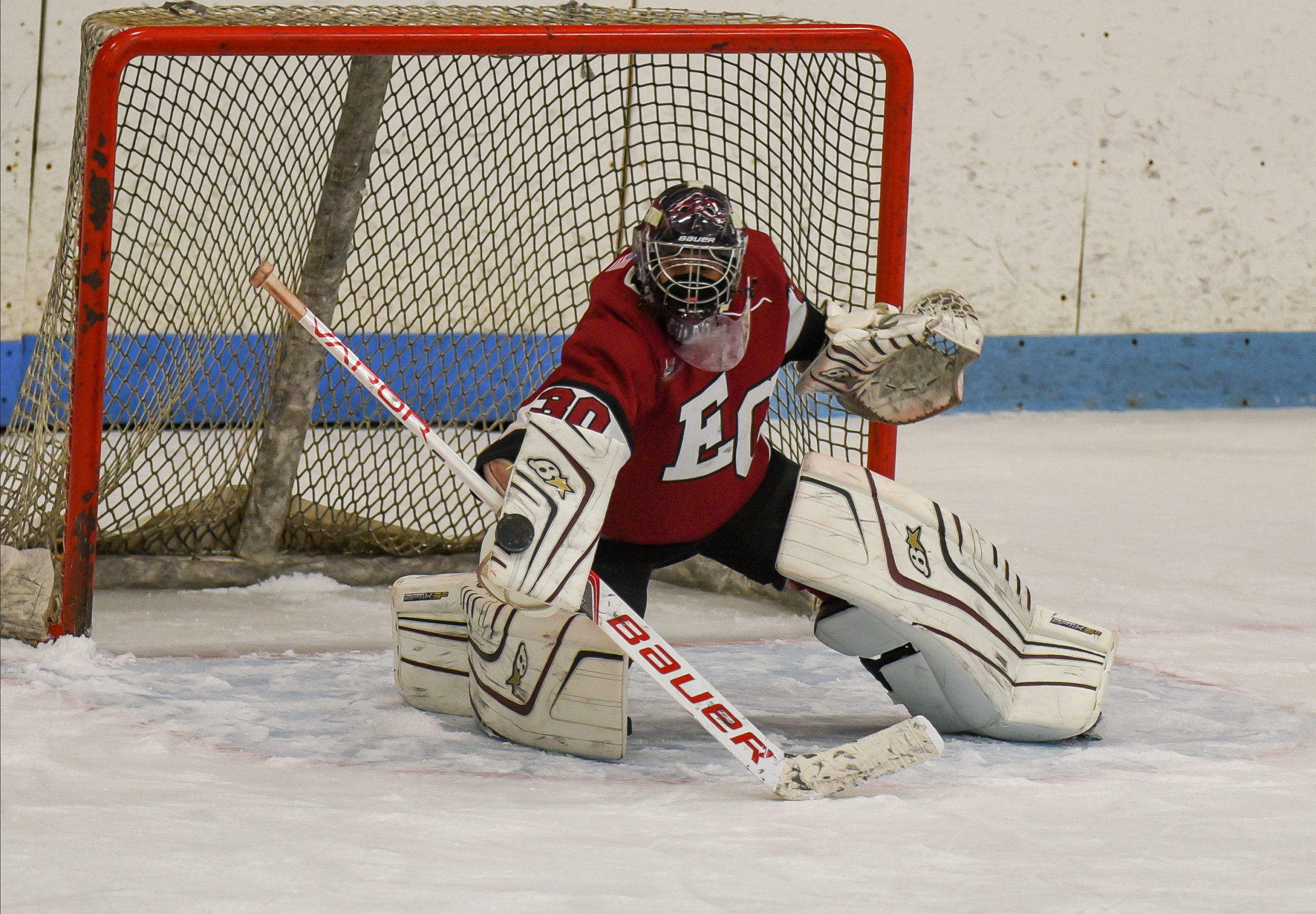 Above: EG’s Jordon Gulati making one of his numerous saves in goal Friday night. Photos by Chuck Nadeau – find all his photos at chuckn.com.

They beat Cumberland 3-2, fall to Smithfield 7-3

When both teams come on the ice with drive and determination, you know you’re in for a good game. Friday night was one of those games – EG came out on top, besting Cumberland 3-2, but both teams came out flying.

The second period started out pretty much as the first with fast up and down skating. Things started to get a little testy with some hard body checking.

Up until that point, the officials pretty much let the players skate. When the checking started getting too physical, they called a couple of minor penalties but kept it even. The Clippers turned it up a notch in the second, scoring twice to tie it 2-2.

That made it anybody’s game going into the third but then EG pulled ahead when Cam Gaffney tapped the puck in, with assists by Gates Omicioli and Colin Walsh. During that final period, officials doled out a couple more minors and warned both teams to keep it down. With about 40 seconds left in the game East Greenwich was called for a minor for interference. That left East Greenwich with a man down, but when play resumed, they pulled the goalie, leaving them two down. EG called on their defense, and they came through holding off the Clippers for the win.

Jordan Gulati, a sophomore transfer to EG, made several saves as goalie during his first varsity start.

Saturday’s game against Smithfield was a similar see-saw affair for the first two periods, with Gates Omicioli scoring two goals for the Avengers, answered from Smithfield in the second period. EG’s Corey Szabo scored early in the third period in a power play, on a deflected shot from Omicioli and Spencer Hallagan.

Then, as Coach Don Dunwoody said Sunday, “the house caved in.”

EG got a minor penalty (one player out for two minutes) followed by a major penalty – Jake Barron hit a Smithfield player in the back, sending him into the boards face first. The Smithfield player was OK but the seriousness of the hit prompted officials to issue the rare major penalty, sending another EG player out, this time for five minutes. Smithfield jumped on the opportunity, scoring 5 goals in the final minutes of the game.

EG’s next game is against Moses Brown Saturday, Feb. 6.

Photos by Chuck Nadeau from Friday’s game against Smithfield:

Close … but was it was called no goal.

Sean Pickard takes a short shot at the net Friday.

Gates Omicioli takes a shot on Cumberland’s goal during Friday’s game against Cumberland. 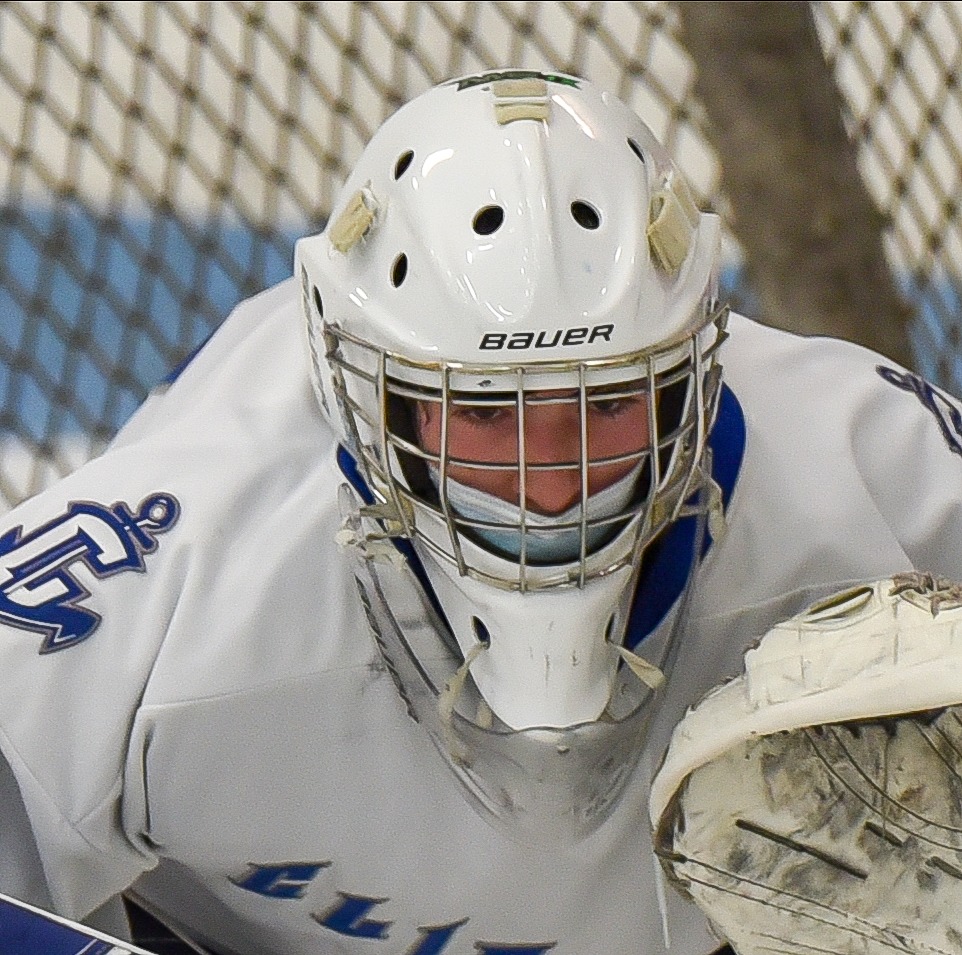 Jordan Gulati makes another save Friday. 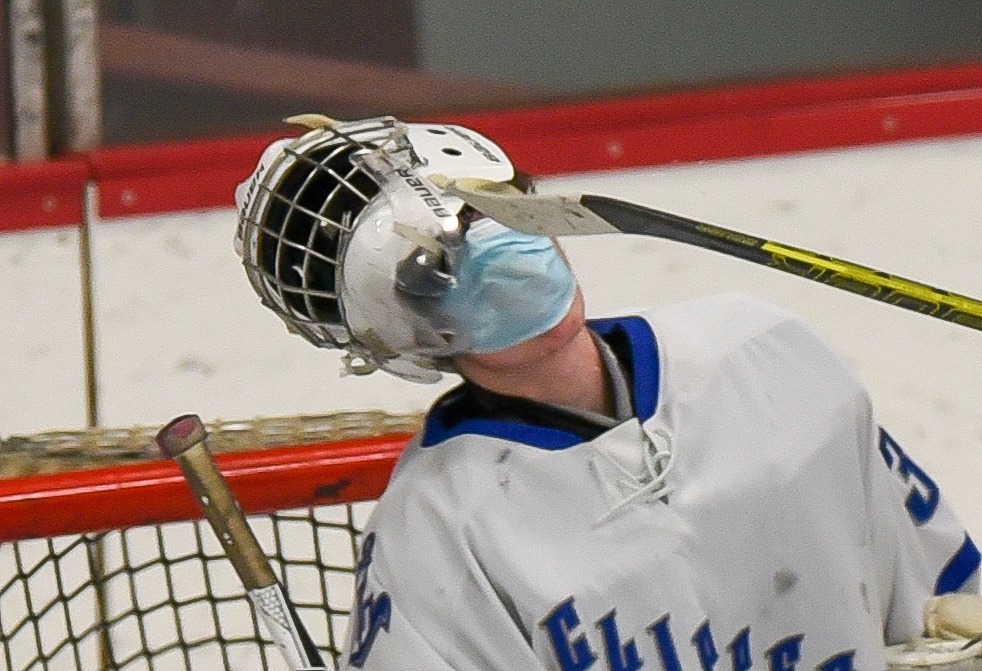 An unintended high stick that was not called.