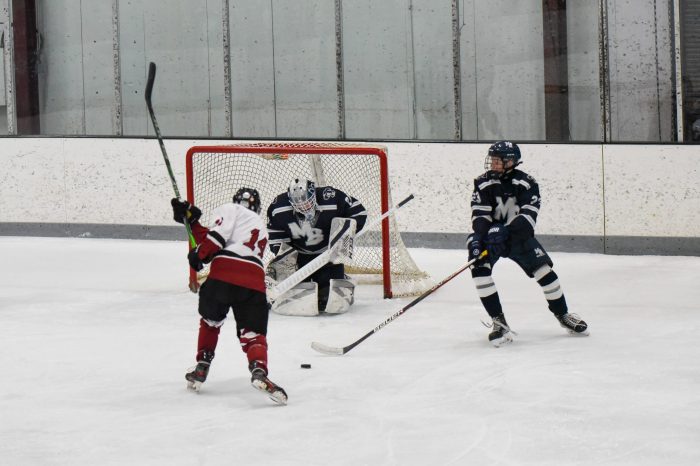 Above: Nicholas Paskalis working against the defense. Photos by Chuck Nadeau (find all his photos at chuckn.com).

The EG Boys Hockey team has done it – heading to a DI state championship for the first time since 2007 after beating Moses Brown 2 games to zero in the semifinals. They will face Bishop Hendricken in the final, a team they’ve beaten once and lost to once in the regular season.

“It feels amazing!” said co-captain Matt Mackenzie. “So happy to be going to the championship with all my best friends.”

Coach Don Dunwoody said that camaraderie has been integral to the team’s success, noting many of them have been playing together for six years. Because EG is a small public school, sometimes players leave to play for a private or prep school.

The Avengers won the first game against the Quakers 3-0, with strong defensive play including a 18-save shutout from senior goalie Cole Barron, as well as two goals from Nick Paskalis and one by Cam Gaffney on offense.

The first period ended scoreless with EG scoring all three goals of the game in just two minutes in the second period. First it was Paskalis on a shot that was down low on the right – ”Couldn’t even believe it went it!” said Coach Dunwoody. For the second goal, Cam Gaffney stole the puck at center ice and passed it to Paskalis, who shot between the circles. Then, just 30 seconds later, Gaffney stole the puck again and scored.

Dunwoody credited EG’s defense too, especially without Cam Warrener, who was out with an injury. “Charlie Gaffney and PJ Casey were standouts on defense,” Dunwoody said. EG won that first game 3-0.

Dunwoody credited Moses Brown for holding EG scoreless during a first-period power play, with the Avengers having a two-man advantage.

“They held us for two minutes – they were playing well,” Dunwoody said. “To kill a 5-on-3 is pretty strong.”

Game two started like game one, scoreless in the first period, but with most of the action at the Moses Brown net.

Sunny Arsenault scored for the Avengers in the second period on a pass from Cam Gaffney after the MB goaltender was pulled out of the net. Corey Szabo also got an assist on that goal.

It was 1-0 going into the third period and five minutes in, Cam Gaffney scored on a rush down the right side. “He turned the defenseman, cut behind him and was able to cut right across the crease and tuck the puck right in the goal,” Dunwoody said. Peter Doorley started the play from the EG defensive zone; Colin Walsh also assisted.

Moses Brown had a power play in the third period and was able to score once, but EG held them scoreless after that, taking the game 2-1 and the semifinal series 2-0.

“It feels great going into the finals. We worked hard to get here and the team and I are really excited for the opportunity,” said senior co-captain Charlie Gaffney. “There’s definitely a sense of urgency in the locker room since a lot of the guys including myself are seniors so this is our last shot at winning it all. Feels great coming from the bottom of D2 [freshman year] to the top of D1, but we still need to go out there and prove ourselves.”

“The team is super excited to be heading to the state championship,” he said. “This week of practice is just all about preparation and I think we’re more than ready for this weekend. It’s been about working hard all year so that’s our mentality heading into the series. Hard work always pays off.”

The first game of the best of three series against Bishop Hendricken takes place Thursday at Providence College. Puck drops at 7 p.m. 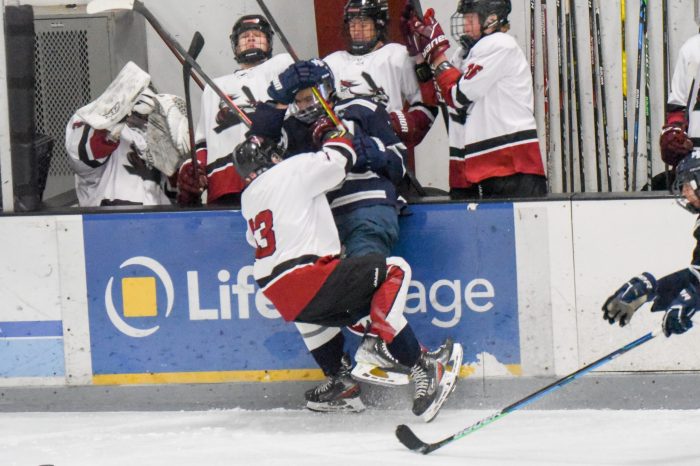 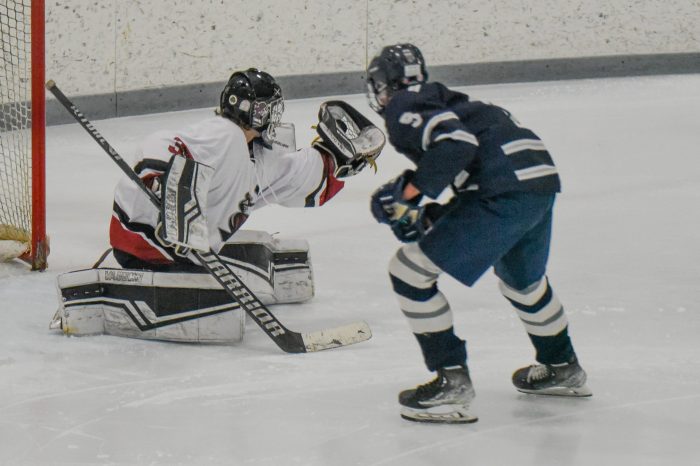 Cole Barron shows the puck to the MB player. 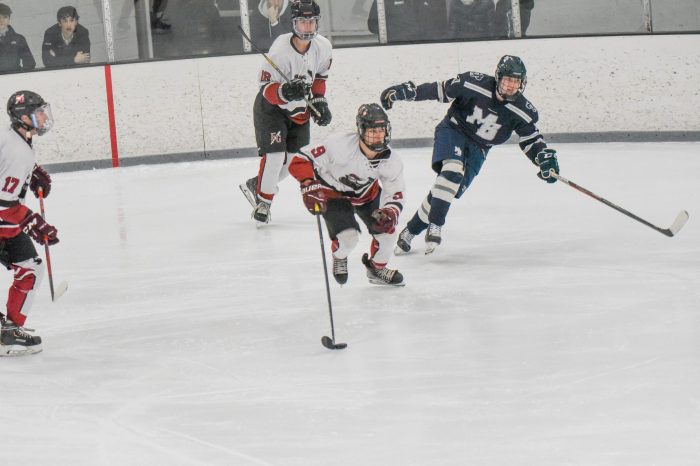 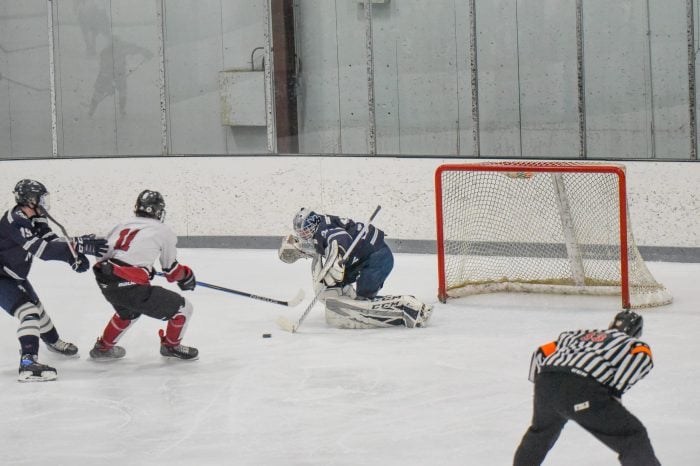 Colin Walsh is looking to finish it off.