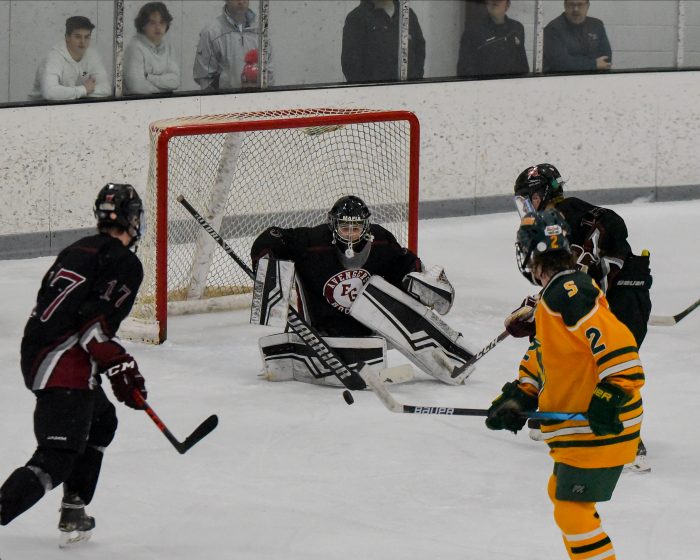 Above: Cole Barron has his eye on it. Photos by Chuck Nadeau – find all his photos at chuckn.com.

It took all three games of the best-of-three quarter-final series, but that third game was decisive, with the Avengers Boys Hockey team shutting out the Smithfield Sentinels 4-0 Tuesday in West Warwick. Now they move onto the semifinals, where they will face Moses Brown in another best-of-three series starting Saturday.

“It feels amazing heading into the semifinals,” said team co-captain Matt Makenzie.  “Confidence is high and all the guys are fired up after the last series’ win.”

EG lost game one of the quarter finals against Smithfield 2-1 but came back to win the second game, 3-2, in double overtime. During the third game, however, there was no looking back for the Avengers.

“I think the difference in the final game was preparation,” Mackenzie said. “We captains drilled it into the guys after the second game how important it was to recover in time for the third game. I think we were well rested, made a few adjustments and were ready to go and it showed.”

In game three, EG’s Colin Walsh scored five minutes into the first period, from the corner on the goal line. The Smithfield defender hit the puck into his own goal. Walsh was assisted by Cam Warrener and Joe Andreozzi.

Corey Szabo scored the third goal, on a redirect by a Gaffney wrap around the net. “Szabo took a back-hander and put it in the goal,” Dunwoody said, with an assist from Walsh.

The final goal was made by Chase Paskalis, with assists by P.J. Casey and Gaffney. “Chase took a wrist shot by the top of the left circle and beat the goalie clean – the shot was a foot off the ice – the goalie had no chance,” Dunwoody said. “We have skilled players on this team and they are performing.”

That includes goalie Cole Barron. “It was a huge performance – he made every save,” said Dunwoody. “Can’t say enough about him.”

Mackenzie said the EG team is strong through experience. “Going from the bottom of Division 2 to the top of Division 1 [in three years] is something we worked very hard for and we put together the pieces along the way. Knowing how hard we’ve worked to get where we are makes us want it that much more.”

Moses Brown upset Burrillville in the quarter finals, 2-1 in overtime in the decisive third game. EG has beaten MB twice in the regular season but did drop a game to the Quakers in the Holiday Classic tournament.

“They are a good team, but they’re not as deep as us,” Dunwoody said.

“We just have to stick to our systems and play our brand of hockey,” said Makenzie. “We took care of Moses Brown in the regular season but the playoffs are a new game. Continuing to use our speed, winning battles and moving the puck in the neutral zone will give us the edge we need.”

He added, “I’m very proud of this team and what we’ve done this year. We are all hungry to play at Providence College for a ring. Excited to see what the future holds for us.”

The first of the best of three semi-final series starts Saturday at 2:30 p.m. at West Warwick Civic Center (aka Benny Magiera Ice Arena). Cole Barron uses his catcher for a save. The team congratulates the goaltender. The goaltenders shake after the game.