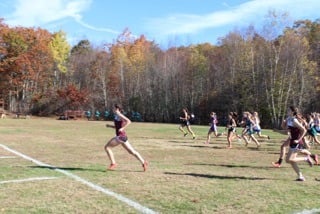 The Freshman Boys Cross Country team blew the competition off the course last week during the Freshman States meet at Goddard Park, with 5 in the top 13 finishers for a total score of 34. Second place Barrington scored 98. In another strong show, both the boys and girls teams won their Class C Championships.

“They absolutely dominated. It was actually one of the more impressive things I’ve seen while I’ve been in high school,” said senior team co-captain Tommy Sommer of the freshman boys. “They’ve been running well all year. They were projected to win their state meet, but they put on a show last week and it was pretty much unprecedented by any team.”

The top finisher for EG was Dante Prosseda, who came in second. Matt Plympton placed fourth, Jeffery Pedersen came in eighth, Cebastian Gentil place twelfth and Alex DeLong came in thirteenth. Only the top five finishers of the team earn scores, but Andrew Blessing was right behind Delong placing fourteenth.

“Dante  is our Number 1 freshman,” said Sommer. “But, really, they have so much depth. There are guys who consistently do a little better but any of them on any day could be a top-five runner.”

For the girls, coming in behind McCaffery was senior Thedita Pedersen in 5th place, freshman Rachel Berman in 6th, senior Sophie Cooke in 16th place and senior Caroline Blessing in 18th place.

This weekend they will compete in states (against all the schools) and Sommer played the optimistic realist.

“Honestly, our team is a little banged up this year, but I’m excited,” he said. “Feeling like I’m in better shape than last year.”

Congratulations to all the teams and good luck this weekend!