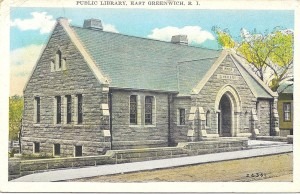 Here’s something about Bruce MacGunnigle that should brighten the despair of any parent of an unhappy student – he hated history in high school. He hated history until he learned about the real people who make up history, through a genealogy project he got as a high school senior. Then he came to love history.

His new book, “Strolling in Historic East Greenwich” – a collection of his columns for the Northeast Independent on historic houses in East Greenwich – is a testament to both his love of history and his love of East Greenwich. The EG Historic Preservation Society is holding a book-signing party for MacGunnigle at the East Greenwich Free Library Monday evening from 6 to 8 p.m.

The book is arranged in a series of walking tours around four significant EG streets: Division, King, Main and Peirce streets. MacGunnigle uses the structures to tell the stories of earlier residents of our town, including soldiers, former slaves, a famous poet, Yankees, immigrants, the prosperous and the less so.

Uncovering the information MacGunnigle uses in each essay took time, lots of time. But that sort of research suits MacGunnigle, who now works part-time for the Town of East Greenwich after a career in the jewelry business. He started writing for the NE Independent two years ago, soon after he stopped working full-time.

“I had been asked before to write columns, but I didn’t really have the time before,” he said recently. “I’ve had a blast doing it.”

That genealogy assignment that got him started? He went home with the chart he’d been given to fill out and showed it to his mother, who grew up in East Greenwich. The family was living in Providence at the time.

“She went to the bookcase and moved a few books, stuck her hand way in the back and pulled out this ratty old book,” MacGunnigle said. The book gave him enough information to fill out the chart, which he did, then handed it in. But there was no information on the women in the family and lots of other blank spaces. As he worked to fill in the spaces, the people brought the history alive.

“As I was learning more about the ancestors, soldiers in the Civil War, the Revolutionary War, maybe a Colonial governor, even a Mayflower Pilgrim, I’d want to find out about their surroundings, about where they lived. So I read up about the history of that particular thing,” said MacGunnigle. “My great-grandfather was at the Battle of Gettysburg so I wanted to read all about that. I learned history that way.”

We’re glad he did.