Siple has been with the department since 1994 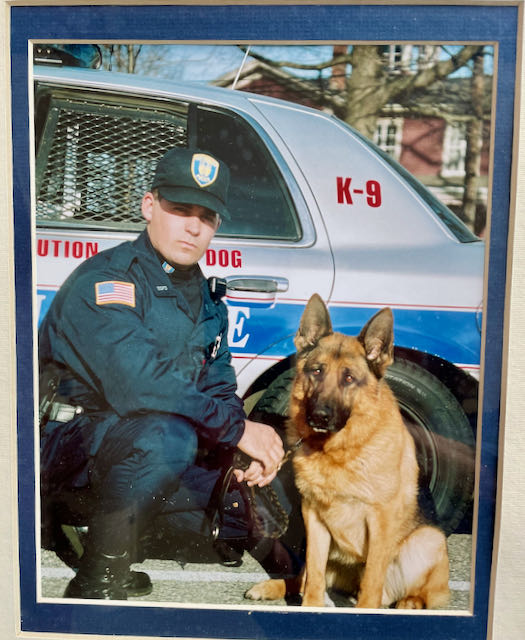 It was former Police Chief Tom Coyle who set Bob Siple on the path that has now taken him to second in command at the East Greenwich Police Department. Siple, who was recently named deputy chief following the retirement of Stanley (Skip) Cirella last spring, said Coyle convinced him to take the sergeant’s test.

“Chief Coyle sat me down and said, ‘If you really want to have a part in shaping the department, this is how you start,’” Siple recalled. He studied and passed the test, became sergeant, then lieutenant and now deputy chief.

“It’s an honor just to have this opportunity – to have a part in the future of this department that I’ve been with for so long,” he said. Actually, Siple is the department’s longest-serving officer, having joined the force in 1994.

Chief Steve Brown said Siple was an obvious choice and was someone who could easily step into the chief’s role if needed.

“He’s got experience. He’s well rounded, well spoken and well liked. He knows the department and understands day-to-day operations,” said Brown. “And he has a good relationship with everyone in the department.”

Brown said another good thing about Siple was his personality. “He’s so personable. He’s night and day from me. I’m more shy. He’s very outgoing. You like talking to the guy.”

Siple, 51, grew up in Warwick and graduated from Toll Gate High School. He readily admits he was not college material at that point – ”I wasn’t really academic in high school” – so upon graduation, he decided to join the Coast Guard. It turned out to be just what he needed. “I used the Coast Guard to gain some experience.”

After four years – two in California and two on Block Island – he left the Coast Guard and applied to a number of different police departments. East Greenwich hired him and that was that.

“East Greenwich gave me the opportunity so I’m going to commit my future here,” he said. Siple went on to earn a college degree while working.

Siple is probably best known in town for his seven years at the town’s first and only K-9 officer, working alongside Astro, a German Shepherd.

Because the department had never had a K-9 team before, “the program was mine to design and create policies for,” Siple said. “It was a welcome challenge and it was satisfying.”

During those years, there weren’t a lot of K-9 units in the state so Siple and Astro were regularly called to help other departments. But when Astro retired, the town decided not to spend money on a replacement. Since that time, the state police have expanded their K-9 units so when the need arises, EGPD can tap the state police.

Siple is also a leader in the honor guard and he was a member of the special response team when that existed. He has also served as head of the police union, so he understands that side of things, said Brown.

Police worked has changed a lot during his years on the force, Siple said, largely for the better.

“We’re more transparent now,” he said. “It’s expected now and I’m OK with that. By being transparent, it protects everyone.”

The next big change will be body cameras and Siple said he’d asked to be involved in their implementation.

“I’m a fan of body cameras,” he said. “It protects society as well as the officers…. We want people to see we’re doing the job right.”

Siple and his wife, Melissa – who have two dogs – moved from Warwick to East Greenwich in 2000. “I’ve never regretted it. I love the town, I love serving the town and I love the community,” he said. “I have a vested interest here.”