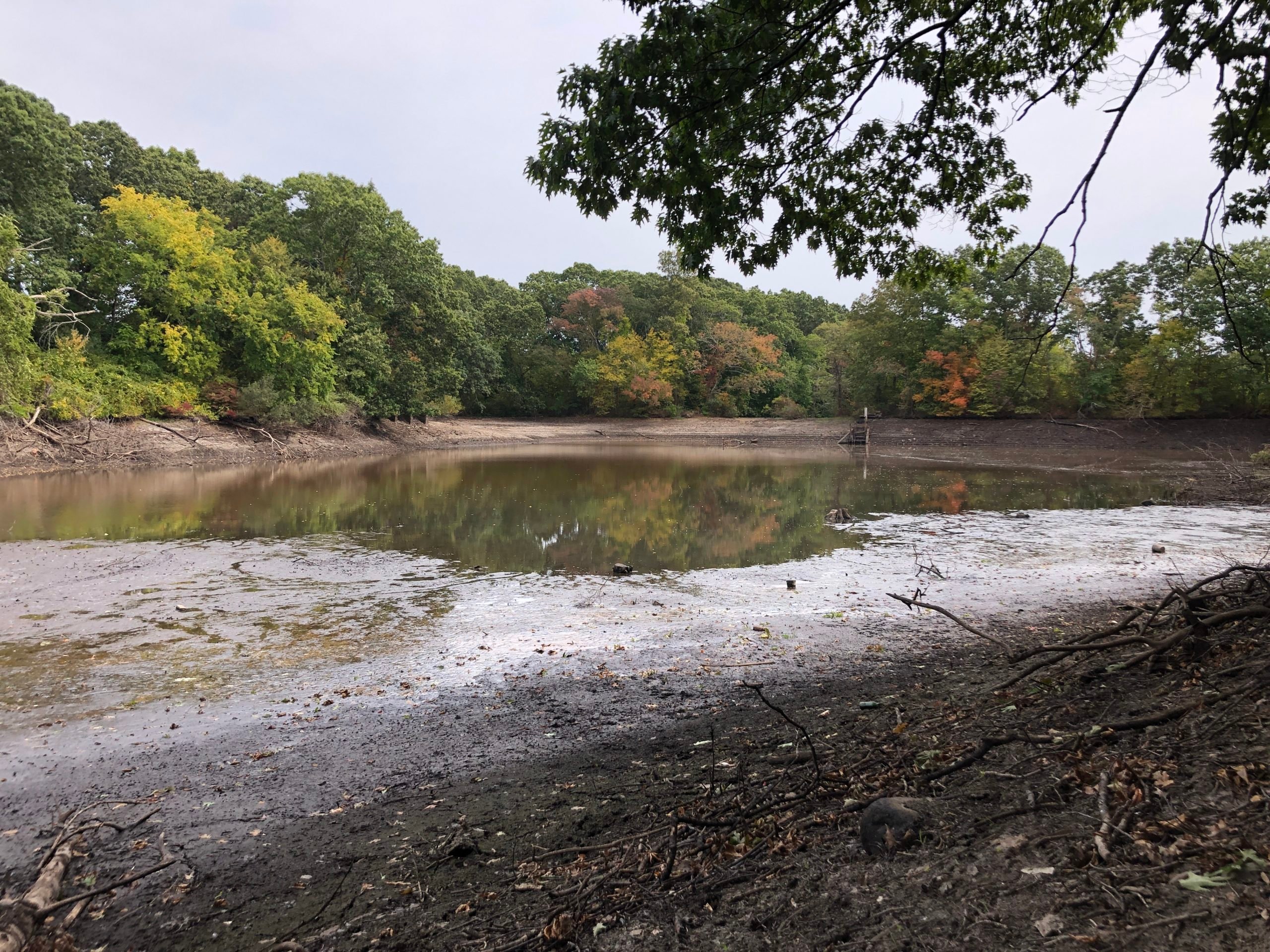 An extreme drought has dried up much of the pond, and everywhere else

Anyone who gardens knows this: it was a very dry summer. In fact, it’s been so dry that most of Bleachery Pond is dry, with water only at the deepest part of the pond, just before the falls. It’s been disconcerting to longtime residents Carole and Mark Finn, whose house on Cedar Avenue overlooks the pond. They say they’ve never seen the pond so low.

“We’re in a bad drought, said state meteorologist and climatologist Lenny Giuliano with the Dept. of Environmental Management. “We’re in the extreme level.”

Giuliano said the state is down 9 inches of rain since Jan. 1. Add to that the heat we saw this summer and waterways are drying up. The average daily temperature July and August is around 72 degrees; this year, it was 76 degrees. Rhode Island saw the second hottest July on record, he said.

With all the other pressing news these days, the fact that Rhode Island is in a severe drought has largely been overlooked. Part of that is timing – the drought didn’t start until the summer. While we didn’t see a lot of snow last winter, we had pretty good rainfall in the spring. Giuliano said there’s rain in the long-range forecast and in fact rain is forecast for the early part of next week.

He did note other possibly good bit of news if you are a business owner hoping to continue using the outdoors this fall: Temperatures are forecast to be higher than normal for the next three months.

When the water level dropped in Bleachery Pond, these wheels emerged from the muck (taken 9/23/20). Credit: Darren Hill

The empty Bleachery Pond has exposed just how full of sediment it is as well as what resident Darren Hill thought might be an overturned car. Fire Chief Bernie Patenaude said he thought it was a cart perhaps made using a truck bed. Hill called the town when he noticed wheels sticking up out of the muck.

According to Town Manager Andrew Nota, the pond belongs to the state so they have put the question to DEM.*

Patenaude, who recently bought a home that overlooks the pond, said he wondered if it would be possible for the town to apply for grant money to dredge the pond, seeing all the sediment that’s built up. It could help ease flooding further upstream, he said.

Patenaude pointed to an area of the pond that’s become a wetlands over the years, overgrown with bushes. “We used to play hockey there.”

The pond was a swimming hole for local youths for decades (you can read about that HERE and HERE) but by the 1980s at least some children were told there was a snapping turtle in the pond, perhaps to keep them from swimming there. The only “beach” for the pond is now owned by the EG Housing Authority and is part of the Shoreside Apartments property at the end of 6th Avenue. Nonresidents aren’t allowed.

The pond from the north, near Shoreside Apartments mid-September 2020.

Bleachery Pond mid-September 2020 from one of the houses on Cedar Avenue.