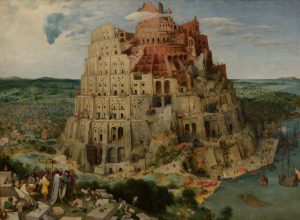 In the end this article is mostly about social and emotional competence. It is, however, also a bit about values and mankind’s tragic dichotomy – that being the conflict between the wonders our brains create and the ability to manage them. In today’s troubled political climate how we handle such concerns is essential. We most likely could say the same about our daily matters.

Even though we have placed a man on the moon mankind still struggles with the same emotional concerns the ancients faced. In fact, we continue to handle them in a like fashion.

So, you are either in love with the “tell them off” style of politics or disgusted that civil discourse has taken a vacation. You are also either elated over being able to get news instantaneously or overwhelmed by what you perceive to be slanted coverage. When once upon a time “the most trusted man in America” told us “and that’s the way it is” we now ignore any information that doesn’t fit into a certain worldview. So much for living in the Information Age.

The Old Testament in the Bible tells us of a tower that, because of man’s hubris, led to a communications catastrophe. Have we replicated this feat through our use/abuse and reliance on the Internet? Have we accessed so much information that we now are unable to decipher accurate and inaccurate facts? We all are well aware of Kellyanne Conway’s “alternative facts” statement. We have to begin to ask ourselves why, with all of our brainiac accomplishments, do such things occur. How come we are having such a hard time discerning things that once were considered common sense?

While computers have brought about many positives, how humans ascertain what to read/listen to and believe is concerning. There are millions of people who believe that Barack Obama is a Muslim who was not born in the United States. There are millions of people who view dinosaurs as a hoax. There is a conspiracy theory waiting to be unleashed for just about anything. How did this happen?

There is a science fiction movie titled “Forbidden Planet” which was made in the 1950s. The technology is dated and some of the acting hokey, but the pictures premise is fascinating (and reflective of the topic at hand).

Forbidden Planet goes something like this. Astronauts land on a planet that was once inhabited by a race known as the Krell. The Krell have been gone for years, but long ago created an incredible civilization. Their intelligence had advanced to the point where almost anything they desired could come about through telepathy. In fact, even though they have been long gone – the machines created, through vast knowledge, still work (after thousands of years). What happened to such a remarkable culture?

For all of the Krells’ prowess intellectually (they were like humans) they were still subject to the same primal desires.

Even though they had performed wonders their ID still was powerful. The ID and incredible power are often a bad mix. Thus, the self-annihilation of an amazing society. They telepathically destroyed themselves.

I often wonder if we can handle some of the advancement brought about by our intellect. For all of the cures, trips into space, and cyber communications we still create weapons to destroy ourselves. We still use technology to argue over Facebook comments. We still find ways to misuse the incredible things our minds have concocted. Look no further for examples than our own social and political worlds. When you stop and think about it, mankind has not really kept up in the social/emotional learning arena.

Each year schools are evaluated by tests to determine effectiveness. Over the last decade, or so, we have assumed that our schools are underachieving due to poor test scores. Soon punishment and embarrassment ensue. While this is going on calls for school reform begin to be heard over again.

For years, educators and employers have been recognizing the demise of social competencies concerning young people. Anxiety along with depressive illnesses have proliferated over the last decade and the number of individuals being prescribed medications for these conditions continues to rise. It seems as though anxiety and depression have become common fare for today’s living.

Once it was harsh elements and the struggle for food. Later, disease, war and superstitions became the issues of the time. While all of these concerns are still in play, new ones have arisen – especially in the so-called civilized world.

Contrary to what you might hear on TV, your chances of getting killed by someone from a civilized nation far exceeds that of losing your life to someone from the Third World or less than rich and powerful nation. This is quite easy to prove. Look at the 1900s. Which nations killed more human beings over that period – civilized versus not so civilized? As we drum up fears about Afghanistan, Cuba, Iraq, Iran, Pakistan, Vietnam (don’t forget these guys) forgotten are the real culprits. England, France, Germany, Russia, China, Japan and the United States have done far more damage. Perhaps we have to redefine what constitutes civilized.

My point is simple – intellectual powers and emotional competencies are two (apparently) completely different things. Don’t you think that we should be placing way more emphasis on the latter for our young people? Don’t you think that History, Philosophy along with the Arts should be valued as highly as Math, Science, and Technology? Don’t you think we should expect more from our leaders than bluster, threats, and solutions that fail to factor in common sense?

I recently wrote an article about leaders and how they are chosen. One might want to consider their ability to make emotionally rational thoughts. Titles and resumes (only) have gotten us in trouble before. What about recognizing those social and emotional skills that help to connect and build good will?

Camouflaging success with accoutrements only delays the inevitable. That inevitable being our need to reach out, connect, learn from, and help. Sure, it sounds simple (for tree hugging liberals like myself!). But just as sure, without doing so, we will continue to fight each other and delude ourselves into thinking that money, power and a “better-than attitude” constitutes success. We owe it to our futures to not become the new “Forbidden Planet.”

Bob Houghtaling is the East Greenwich substance abuse counselor. He is also head of the Academy Foundation and is on the board of East Greenwich News.