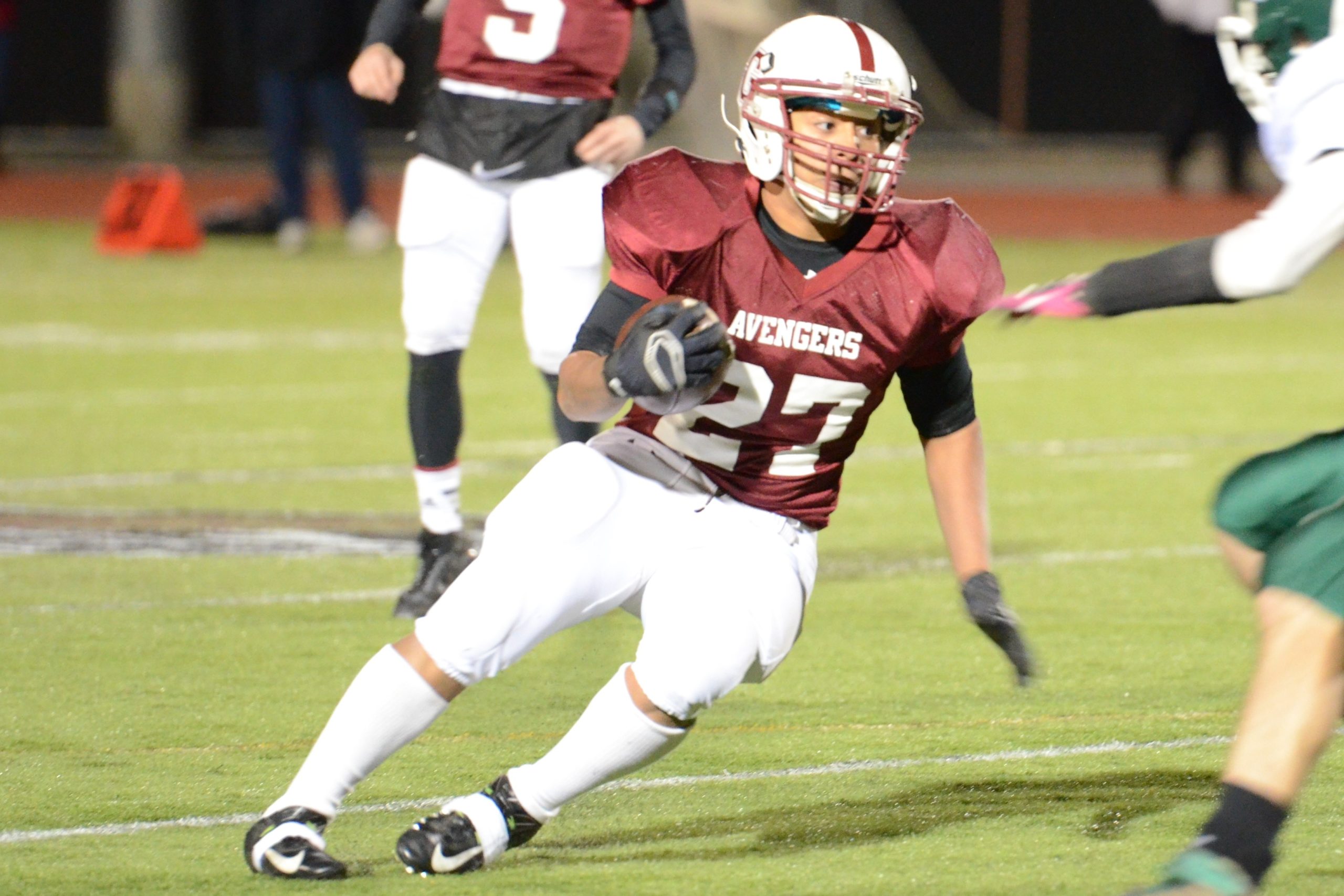 The East Greenwich Avengers continued their winning ways Friday night, thumping Ponagansett 27-0 on Senior Night at Carcieri Field. The team’s overall record moved to 7-3, 6-1 in the Division III. East Greeenwich’s defense has allowed only one touchdown in the last three games and had a number of key stops to keep the Chieftans off of the scoreboard. Senior Captain Rayann Faizan made the most of Senior Night by scampering for two touchdowns.  The Avenger victory, combined with Middletown’s victory over Classical assures East Greenwich the #2 seed in the Division III playoffs and a home game in the first round.

The Avengers set the tone early, marching 70 yards for a touchdown on their first possession. The offense line was having its way with the Chieftan’s defensive front, allowing junior quarterback Nick Andreozzi to run for 8 yards, followed by a 10-yard grab by senior Quinn Sullivan and another 19 yards on the ground by Andreozzi.  Sophomore Mitchell Gemma then picked up 5 yards and 9 yards on two runs to the left side. After Andreozzi hit Egan Reale with a 6-yard pass, Faizan ran it in for the touchdown from the 10. Owen Hainse hit the extra point to give the Avengers a 7-0 lead.

For much of the rest of the first half neither team seriously threatened until the Chieftains took over just before the four-minute warning. Ponagansett quarterback Kyle Courtemanche used his feet and his arm to move the Chieftains. After a number of keepers, he hit David Campbell on a long pass to move the ball to the Avenger 15.  The Avenger defense stiffened with Hainse, Sullivan and Brian Gemma breaking up passes on second, third and fourth down respectively. That gave Nick Andreozzi and the offense the ball on the 15-yard line with 1:23 on the clock. They would only need 1:06. Andreozzi connected with Reale for 23 yards, and 11 yards before hitting senior Dylan White on the 18-yard line with 20 seconds left. Andreozzi then ran the ball to the 1 before Faizan punched it in for the second time with 7.7 seconds remaining to give East Greenwich a 13-0 touchdown at half time.

The Avengers continued their opportunistic play when they recovered a fumble on the kickoff to start the second half. It didn’t take East long to strike. Andreozzi hit Egan Reale to the right side on second and ten for a touchdown with 11:40 in the third quarter. After Hainse hit the extra point the Avengers had a 20-0 lead.  Significantly, the Avengers have converted five turnovers into touchdowns during their recent run.

To their credit, the Chieftains didn’t quit. Courtemanche led them on a 68-yard drive beginning at his own 30.  After a 25-yard pass to David Campbell, Courtemanche called his own number for runs of 9 and 6 yards before senior running back Justin Burchett broke off a 22-yard run to the Avenger 17. Courtemanche then made it first and goal at the Avenger 7, followed by a run to the 2. The Avenger defense then showed the heart it has all season with Dillan White stuffing the first run up the middle and junior Kevin Lippe and senior AJ Turchetta making the stop on fourth down. After the stop you could sense the let down from Ponagansett.

It didn’t get any better for the Chieftains. After a short run to get some additional room, Andreozzi hit Egan Reale with a short pass that Reale broke open to turn it into a an 89-yard gain, bringing the ball to the visitor’s 9-yard line. The run featured broken tackles, cutbacks and help from his other wide receivers. Andreozzi then hit Sullivan on a 2-yard pass to Sullivan who closed out his senior night with a touchdown of his own with one minute remaining in the fourth quarter to provide the final margin, 27-0.

EG seniors during a ceremony before Friday night’s game.

Before the game, the team saluted seniors Quinn Sullivan, Dan DePetro, Will Heffernan, Ryan Marshall, Dillan White, Jake Batista, Rayaan Faizan, and AJ Turchetta. Ryan Marshall captured the night perfectly: “I thought it was great to see the team come together.  It was great playing with my senior friends in front of a great crowd.  We’re not done yet though. We have some football to play still,” said Marshall.

The Avengers play their final divisional game next week at Pilgrim before wrapping up the regular season at Exeter-West Greenwich on Thanksgiving.