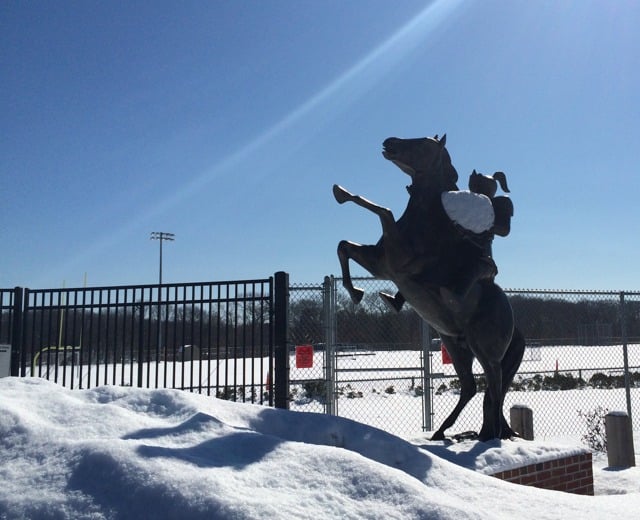 The East Greenwich Avenger’s Boy’s Basketball team’s dreams of a Division Two Championship died last night as they fell to the Middletown Islanders 53-45 in front of a packed East Greenwich gymnasium. Kyle Donovan of Middletown led all scorers with 19 points while Brian Gemma led the Avengers with 15 points. EG’s Kyle Matus chipped in 13.

Although the Avengers jumped out to an early lead with a basket by senior Nolan Cooney, they soon went cold. Despite getting decent looks at the basket, they were not able to convert with any consistency throughout the first half. With East’s offense sputtering, Middletown employed solid outside shooting and aggressive rebounding to establish. Using outside scoring by Middletown senior Jameson McQuade and Donovan, the Islanders built a 12-5 lead with 9:29 left in the first half. The teams essentially traded baskets until Donovan took control toward the end of the half, hitting two long 3-pointers and making 2 free throws to give Middletown a 24-14 lead at the break as the Islanders ended on a 9-4 run. Unfortunately, late in the first half the Avengers had some foul issues with Patrick Norton picking up his third personal with 2:26 remaining. The Avengers were one for six from the line in the first half.

With the way the Avengers were shooting, the team was fortunate to only be down by 10 at half time. Having come back from significant deficits throughout the year, however, the team was not rattled. East Greenwich opened the second half on an 8-point tear with Nolan Cooney scoring on a drive to the basket and Kyle Matus knocking down 2 big threes to get the East Greenwich crowd rocking. McQuade then picked up his third and fourth fouls and had to go to the bench. The Avengers picked up the intensity and extended the defense on Donovan. When Adam Duval scored on an inbounds play with 11:17 the momentum seemed to be squarely on the side of the Avengers. Forty five seconds later Brian Gemma hit 2 free throws to give the Avengers a 27-26 lead and it appeared the Avengers had righted the ship. Unfortunately, they would not lead again.

Kyle Donovan hit another long 3-pointer to give Middletown a 29-27 lead and the momentum began swinging the other way. East Greenwich had three rough trips down the floor including a turnover, a near shot clock violation and an actual shot clock violation. When Middletown scored on a nice take in the lane by Jameson DelRoss, Middletown had a 5-point lead and had picked up the defensive intensity, draping Connor Murphy all over Brian Gemma. Middletown went on a 13-0 run, including a dunk by DelRoss to make the score 40-29 with 4:35 left.

East Greenwich never quit but they could never cut the lead to less than 8 points. Middletown was able to change from its outside game to more of an inside game. The Avengers extended the defense to take away the long ball but that provided opportunities for the Middletown big men inside. They converted and Middletown moves on while the Avengers await to see if they qualify for the Open State Tournament.

Prior to last night’s game the Avengers had been a perfect 11-0 at home.

East Greenwich had beaten Middletown 52-46 at Middletown on Jan. 9, during the regular season.