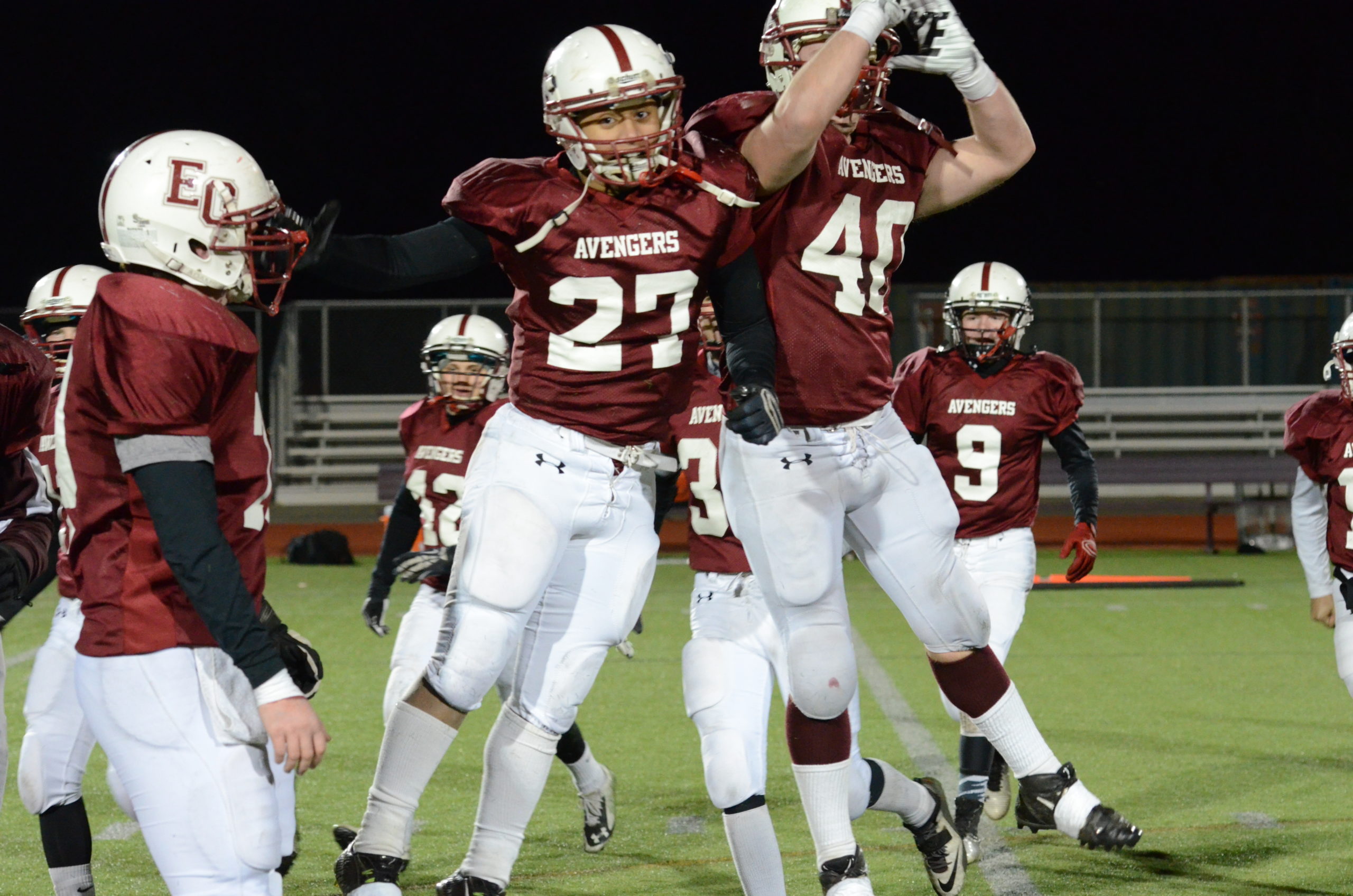 Using a dominant defense and an opportunistic offense, the Avengers cruised to a 40-0 shut out and their second Super Bowl appearance in three years. Some thought that the return of Classical’s starting quarterback, who missed the regular season game where the Avengers won 20-14, might give the Purple an edge in the Division III Semifinals last night at Carcieri Field.Different quarterback, same result. Mitchell Gemma had 171 yards rushing, including two touchdowns for East Greenwich.  The Avenger defense prevented Classical from completing a single pass and continued to rise up on big fourth down plays to turn over their opponents.

Through the first half, both teams had opportunities. On the first drive of the game, Classical used its exterior running game to move the ball quickly down the field, with running back Andrew Meyers tearing off a 31-yard gain and another 8-yard gain. After Classical converted on 4th and 2 to give it a first down at the Avenger 15-yard line it looked like it might be a long night for the Avengers. As it has all year though, the defense stiffened and stopped Classical on 4th and 4 to get the ball back on their own 7-yard line. East Greenwinh then had a balanced drive that lasted close to 9 minutes, which included runs of 7, 11 and 18 yards by Dillon White, 7 yards from Rayann Faizan and a pass interference call on Classical.  Unfortunately, it was all for nought as Classical’s defense tightened up and the Avengers turned it over on downs. The teams then traded possession for the rest of the first quarter.

Nick Andreozzi on a quarterback keeper.

As they have all year, the Avenger defense made another great stop on 4th down when Jared Maymon crashed through the Purple line on 4th and 3 to tackle Meyers behind the line. That gave East Greenwich the ball on the Classical 43 with 10:45 remaining in the first half. Quaterback Nick Andreozzi and the offense went right to work, with Andreozzi running 13 yards around left end, followed by a 14-yard gain by Mitchell Gemma up the middle. Andreozzi then rolled out of the pocket and connected with White on an 11-yard pass to the end zone, giving the Avengers the 6-0 lead. After Classical went 3 and out on their next drive, it looked like the Avengers would take it in again. Mitchell Gemma had carries of 8, 8, 7 and 5 yards. When combined with a Classical penalty and a 21-yard gain by Andreozzi, the Avengers had it 1st and 10 at the Classical 11-yard line. Unfortunately, East couldn’t punch it in and turned it over on downs.  They would head into the locker room with a 6-0 lead at half time.

In the second half, the Avengers continued to move the ball well against the purple. The first drive featured a nice pass to the right side line by Andreozzi to Quinn Sullivan on 3rd an 8 from his own 21.  The senior turned the catch into a 40-yard gain. The Avengers also had a crucial conversion on 3rd and 15 when Andreozzi threw a strike to Egan Reale for a first down at the Classical 29. Mitchell Gemma then scampered 29 yards for a touchdown on the following play. Combined with Owen Hainse’ extra point the Avengers lead 13-0 with 9:16 left in the third quarter.

On the following drive, Brian Gemma grabbed his eighth interception of the year to give the Avengers the ball on their own 9-yard line at 3:52 of the 3rd quarter. The Avenger drive would only last a single play and 17 seconds. Mitchell Gemma took the hand off on first down, started right and then cut back through a great hole opened by the East Greenwich line. As soon as the sophomore running back slipped through the point of attack, the only question was whether the chasing safeties or a lack of oxygen would catch him. Neither did and the Avengers had a 20-0 lead. During their recent streak, East Greenwich has continued to take advantage of opponent’s miscues.

Although the Avengers recovered a fumble on the ensuing kickoff, they couldn’t get anything going and had to punt. Classical again went three and out but when the punt only traveled to the Purple 35-yard line, East Greenwich capitalized. Andreozzi ran for 5 yards, then found Reale for 5 yards on fourth and 5.  Mitchell Gemma then had two carries to get the ball to the Classical 11-yard line. On the following play, Andreozzi sprinted around the left end and looked like he would be stopped for a gain of 5. He would not be denied, however, and slipped a tackle and dove, hitting the pylon for the touchdown, to make the score 27-0 with 9:32. On the ensuing kickoff, kicker Mason Botelho recovered a fumble when the up man for the Purple couldn’t field the squib kick, giving East the ball on its own 42. At that point, you could feel the wind come out of the Purple’s sails and the Avengers knew they would  be playing football in December. Mitchell Gemma then picked up where he had left off and ran the ball 34 yards to the Classical 25. Owen Hainse then ran 6 yards to the 19 before finishing the drive with a 19-yard run for the touchdown. After Hainse hit the extra point the Avengers had a 34-0 lead and only 7:12 seconds remained in Classical’s season.

Classical still played hard down the stretch but couldn’t get anything going. The East Greenwich secondary, knowing that Classical had to pass, was prepared and again stopped the Purple. After a failed fake punt, East Greenwich took over on downs and needed only four plays to find the end zone. Andreozzi threw a perfect strike to Quinn Sullivan on the left side of the end zone on 4th and 4 to provide the Avengers with the final margin, 40-0.

The win gives East Greenwich the opportunity to try to avenge a 24-7 loss to Middletown which occurred back on Sept. 20. Since that time, the Avengers have not lost within the division and have outscored their division opponents  236-51 with four shutouts. The Super Bowl will take place on Dec. 7 at Cranston Stadium. The Avengers are hoping for a lot of fan support.  Before they play that game they will travel to Division IV, Exter-West Greenwich, for the annual Thanksgiving Day game at 10 a.m.