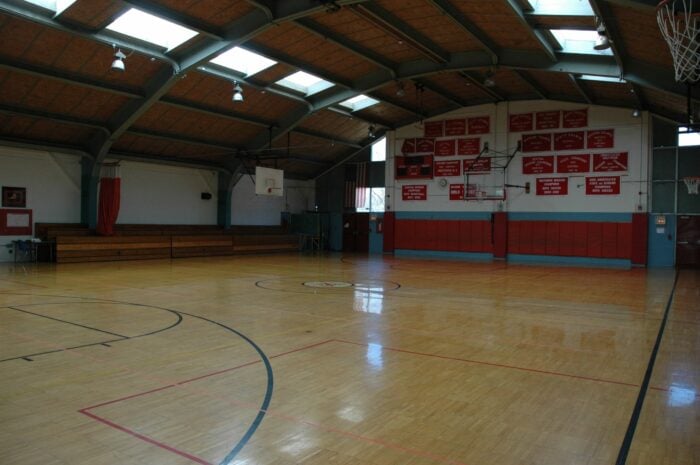 Dominic Iannazzi taught, coached and served as principal in EG schools from 1951 to 1978. As Mark Thompson put it after Iannazzi’s death in 2017, the man was “a black-and-white guy in an increasingly Kodachrome world.” Bruce Mastracchio had his own run-ins with Iannazzi during the school year, including this classic battle of wills. Here he shares another memory of the man he called “Iron.”

Readers, I have been wracking my brain to shake loose some more stories on Dom.

I came up with this one for now and found a couple of more at the edge of my memories. See what I can wire together after I get through with this one.

White men can’t jump so they say. I do know that we were always trying to “dunk” the ball at basketball practice. I could get my hands to the rim without the ball, and come close with it, but I could not dunk!

When we played pickup at Jimmy Lafreniere’s house he had a 9 1/2 foot basket. We could dunk on that one and it was fun. We were all the best dunkers who ever lived! 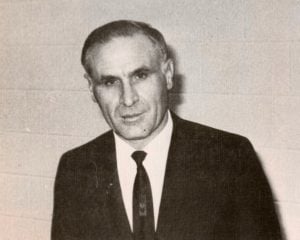 Anyway, at EGHS we practiced after school from 2:30 to 5 most of the time (Editor’s Note: the old Cole served as the high school in those years). We only had the girls team to contend with and I can’t remember how we shared the gym. Maybe they used the cafetorium, which could be configured for lunch, school plays and productions, ceremonies and plays due to the movable tables and chairs they used in there.

I always got out to any practice early (football, basketball, baseball, gymnastics, etc.) so I could punt, pass, shoot, practice behind the backs, whatever.

When we started practice it was usually with the full court  three-man weave. Then we worked on offensive plays. The five-man weave and the half-court three-man weave with the attendant plays. Next was defense and the hour or so devoted to that. Then we would scrimmage. First team against second or a mix of each team against another. That would be followed by sprints and then foul shots. Sometimes we would do sprints and foul shots and then scrimmage.

On this particular day we were going to scrimmage last. It was being started with a jump ball. Iron and Coach [Nicola] Carcieri were going to ref the “game,” I pushed myself forward so I could do the jump ball against the other team’s center (I was a guard).

Iron came to the center circle with the ball in his hand. He bent some, held the ball up, and tossed it up in the air.

I came out of my crouch, springing for the stratosphere. I wanted to win the jump ball. My skinny, little legs were kicking mightily as I strained to win the tap.

Unfortunately, I was kicking too hard and I kicked Iron right in his gunny sack (ballettos, cajones and numerous other terms could be used)!!

He doubled over in pain and immediately yelled at me, accusing me of kicking him there on purpose.

As God is my judge, I had not done it on purpose, though, I must admit that the sight of my  constant tormentor of the classroom and field, doubled over in pain, was kind of funny to see and satisfying in a strange sort of way. I suppose in my dream of dreams I had probably

imagined doing that, or worse, to him, had I ever gotten the chance.

The team was dismissed from the court except for me.

“100 Laps MMastracchio,” Iron bellowed (hitting the double first letter as was his trademark).

“100 Laps for what ?” I countered. I hadn’t done anything, and I certainly hadn’t done that on purpose.

And Iron sat in the bleachers and counted every one!

And  if you cut the corner of the basketball floor he did not count it.

That was Iron. He never changed. You knew what to expect.

P.S. In those days I could run all day and half the night. I ran everywhere. It used to piss Iron off that he could not wear me out. When he made me run hills during football I would laugh and he would get madder and madder. I loved it!

Later on when we became friends he admitted that I used to get to him and he tried to wear me out.

Writer’s Note: If any of you readers have some ideas for more Iron stories or maybe some of your own , Please email me with them and I will share. I know Ace, Roval, Gaillace and a few others have some. Share with us.