Anatomy of a Movement: How a Parents’ Group Won 3 School Committee Seats 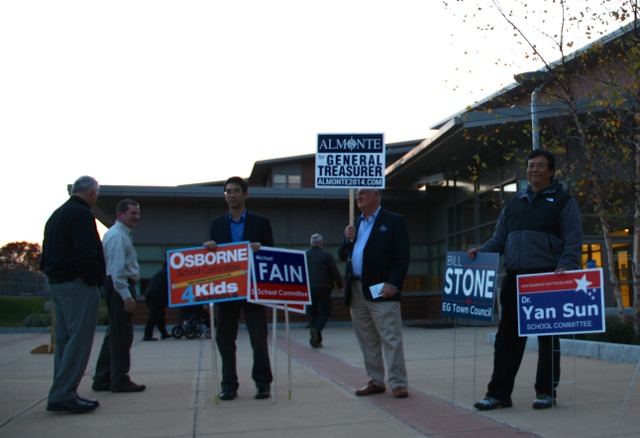 School Committee candidates David Osborne, Michael Fain and Yan Sun and their supporters were at several of the polls on Election Day.  Credit: EG News

The victories by three allied political newcomers in the race for East Greenwich School Committee last week – and the defeat of both the School Committee chairman and a vocal member of the panel – caught some by surprise but, according to a number of parents, it follows years of growing unease with the leadership of the EG school district.

Michael Fain, Yan Sun and David Osborne had all been endorsed by the Facebook group, “East Greenwich Parents for Excellence,” and they won seats on the School Committee. Mary Ellen Winters won her third term on the panel, rounding out the four seats that were up for election. Chairman David Green and member Jack Sommer lost their re-election bids.

While the parent group initially became known in town because of the issues of later school start time and all-day kindergarten, many of those parents, including Sun, Osborne and Fain, have said in recent weeks their engagement was not driven by a single issue. Rather, they said, it’s been the overall handling of those two issues and many others by both the administration and the School Committee that has motivated them to act.

“It wasn’t any one issue, but there were enough different issues that came up over the past few years that people felt it was not just time for different leadership, but for a particular kind of different leadership,” said Joy Weisbord, a parent. She said she started paying closer attention several years ago, she said, after the former “gifted” program known as CPT was eliminated and, to her frustration, nothing was put in its place.

Some parents got involved because of how Supt. Victor Mercurio and the School Committee handled parent frustration with what the parents said was an unwelcoming atmosphere at Frenchtown Elementary School. According to some of the parents involved, in 2013 they presented a letter outlining their complaints to Mercurio and the School Committee signed by 120 Frenchtown parents. Weisbord and Fain were among a handful of parents who eventually met with Mercurio to discuss the letter. They said School Committee members did not respond to the letter and Mercurio did not follow up with the larger school community as promised, although they noted the school was doing a better job communicating with parents this year.

The process surrounding the strategic plan (which the committee started working on in September 2013) also prompted frustration among some parents. Parent Kristin Lehoullier, a member of the ad hoc strategic plan committee (a School Committee-sanctioned panel established last fall), wrote this in October 2014 in a letter to School Committee members:

“The original mechanism for engaging community residents through the ad hoc committee was not authentic. [It] has not met for almost a year and has not engaged to provide substantive input into the planning process…. In addition, there have not been intentional efforts to publicize the process, engage residents in the process, or ask for their feedback. Nor has there been communication with the ad hoc committee…. In short, the district and School Committee have missed many opportunities along the planning process to get input, utilize community-based expertise, and galvanize support for the plan.”

For many of these parents, their frustration stemmed from what Lehoullier called an “overall lack of responsiveness” from both Mercurio and the committee. Late last spring, the parents began looking for candidates to run for School Committee.

“A group of us started regularly attending School Committee and subcommittee meetings … and just weren’t satisfied with the level of productive discussion that was going on. The members were all lovely people, that wasn’t our issue, it’s not personal,” said Weisbord. “It’s just that in terms of filling the seats with the right people for the job, we felt there was some needed improvement.”

In addition, she said, they were looking for candidates with a team-based approach and people not be afraid to ask questions and do research. They wanted “people whose outlook was more ‘how we might’ than ‘why we can’t,’” said Weisbord. “People who would be productive, valuable, working members of the board – ready, willing, and able to put in the time and effort that East Greenwich’s schools and citizens deserve.”

Originally, four parents from this allied group filed candidacy papers but one of the candidates, Lehoullier, dropped out in August, citing an increased workload. The remaining candidates and their supporters used social media, yard signs and friends to get their message out. Parent Rebecca Bliss, who created the EG Parents for Excellence Facebook page, was one of those who worked hard on behalf of the three candidates.

In the end, Yan Sun received the most votes, Fain got second place, Winters came in third, and Osborne placed fourth.

Post-election, none of the three committee member-elects said they were looking to foment revolution.

“I just am grateful that enough people in town decided that I can represent the interests of students, parents, and teachers on the School Committee,” said Osborne, “and I want to focus all of my efforts on looking forward, not backwards.”

Sun spoke of gratitude but also of the responsibility she felt to really understand the community’s needs. As for working on the committee, she said, “I think we’ll have a good team together, that we have common ground for collaboration – to really have student interests as our top priority.”