‘Always Above & Beyond’ – EG Teacher of Year Kara Ratigan 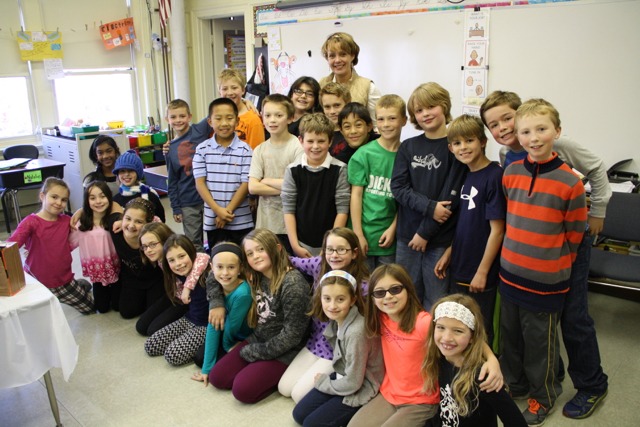 Kara Ratigan’s always been one of those teachers everyone wants – students and parents alike.

She’s just one of those teachers. Recently the Eldredge Elementary fourth-grade teacher was recognized by the state Department of Education as the East Greenwich Teacher of the Year.

It’s the second time in two years that a teacher from Eldredge was honored – Elaine Smith was named EG Teacher of the Year last year.

“I was just so touched by it,” said Ratigan after a recent School Committee meeting where she was honored. All the honorees from around the state were celebrated at a special Waterfire in Providence in September. “It was really neat,” she said.

The way the process works, according to Eldredge Principal Dom Giusti, is someone has to nominate the teacher. In this case, it was the family of a former student.

“It’s really nice when it comes from a parent,” he said.

About Ratigan, Giusti was enthusiastic in his praise.

“Kara’s fabulous. We alway expect everyone at Eldredge to go above and beyond and she sets the bar. She leads the charge,” he said. “Any new initiative, she raises her hand first. At the tech conference – she went before it was popular. She goes to the all-day Saturday STEM conference at Rhode Island College. She’s the liaison with the PTG. I don’t have to ask her to do anything. She volunteers before I get a chance to call her.”

When it comes to her students, said Giusti, “It’s all about the kids. Every single day, there’s a smile on her face. She individualizes all instruction. She does it all.”

He noted Ratigan often gets contacted by area universities to act as a critic-teacher for their teaching students. “Everyone wants her,” he said.

And East Greenwich has got her. We’re so lucky.