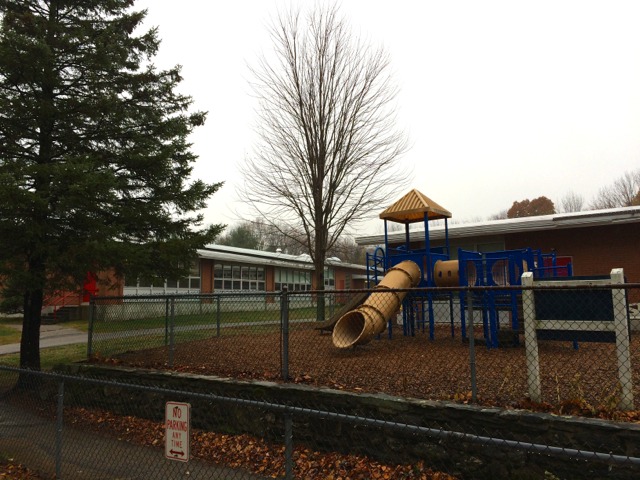 All-day kindergarten is far from a done deal in East Greenwich but one of the questions that will need to be answered is what it would cost to retrofit Meadowbrook and Frenchtown elementary schools for additional kindergarten classrooms. A preliminary study of the two kindergarten-through-second grade school buildings outlined what sorts of steps would need to be taken at each but did not supply cost estimates.

Adding all-day kindergarten at Frenchtown is a little more complicated than at Meadowbrook, according to Strategic Building Solutions (SBS), a construction management company that has worked on all recent school building projects in East Greenwich. But both schools – which had been K-3 schools until the third grades were moved in fall 2013 – have the space to accommodate more kindergarten classes.

At Frenchtown, there are two kindergarten classrooms that have morning and afternoon kindergarten classes. Moving to an all-day program would immediately require two more classrooms, but school officials want to prepare for adding three additional classrooms at Frenchtown. According to Principal Cheryl Vaughn, Frenchtown typically gets between 12 to 15 new first graders each year – many of whom had been enrolled in private all-day kindergarten programs.

Frenchtown has different “pods.” The current kindergarten classrooms are separated from the three other pods so the idea would be to situate the additional K classrooms as close to the existing K classrooms as possible – in the former third-grade pod, which is now used by art, music and specialist teachers.

The bathroom in that pod would need to be retrofitted to accommodate the smaller children but the biggest issue would be adding doors to the outside to each of the three classrooms. Kindergarten building code requires straight access to the outside on new construction, according to SBS. That presents a design challenge, said Charlie Roberts from SBS, because the school was built on a hill, so there are grading issue to deal with. To make the exits handicapped accessible, a wide “sidewalk” would need to be added, with a switchback ramp to get reach the ground.

It was unclear, however, at the School Building Committee meeting Nov. 5 if East Greenwich would need to follow kindergarten regulations for new construction or if there would be the possibility of grandfathering some things. Bob Wilmarth, head of facilities for the school department, said last week he would be meeting with the town’s building official and the fire marshal to discuss the requirements.

Meadowbrook, meanwhile, has three kindergarten classes already, including one that is all-day that serves children from across the town who “test in,” showing some need of additional help. School officials are planning for two additional kindergarten classrooms at Meadowbrook, in part because the current all-day Meadowbrook program serves the whole town, and if all-day K is introduced, those students in the Frenchtown-Eldredge district would attend Frenchtown.

According to Meadowbrook Principal Neil Marcaccio of SBS, the addition would require moving everyone around but “we do have a lot of space at Meadowbrook.”

While it would be ideal to have bathrooms in each classroom, Marcacchio said there were bathrooms relatively close to the rooms they are looking at using.

The next order of business would be to get a professional estimate, said Wilmarth. The district has determined that it can house additional kindergarten classes at both Meadowbrook and Frenchtown, he said, “but there’s still a lot of stuff that needs to be done.”

And, of course, that’s only one piece of the all-day kindergarten puzzle.

Last summer, the School Committee named an ad hoc committee to look into the issue and the panel should be issuing a recommendation sometime before the end of the year, according to Supt. Victor Mercurio.

Even if the panel’s findings are in favor of adding all-day kindergarten, however, the School Committee would still need to vote on it and figure out how to pay for it. While no one has said what it could cost in East Greenwich, the cost of one full-time teacher is around $80,000 (including benefits). If five more kindergarten classrooms are added, that would add $400,000 to the budget, not counting additional special education teachers, specialists and “paraprofessionals” (teacher aides) who could be required.