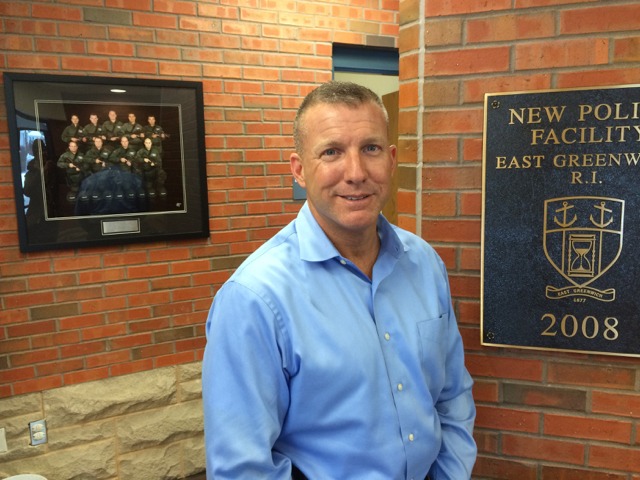 Jon Chirnside has retired after 26 years as an EG police officer.

EGPD Detective Sgt. Jon Chirnside was still a kid from North Kingstown when he started in police work, just 19, hired as a “summer officer” on Block Island. He was too young to even have a beer when he got off work. Chirnside was the youngest of the summer applicants and initially the chief thought he was too young. So Chirnside took the ferry home after the interview, thinking, “So much for that.” A day or two later, though, he got a call while at his part-time job at Wilsons of Wickford. It was the chief, offering him the position.

And, after a summer policing on Block Island, Chirnside was hooked. A student at Salve Regina studying criminal justice, he got hired on as a “special” officer in East Greenwich (special officers, a category that no longer exists in East Greenwich, where people hired as kind of a pre-officer), working and going to school. That was 1989. Earlier this month, 26 years later, Chirnside retired from the EG Police Department.

“It’s kind of bittersweet,” he said a few days before he retired. “I’m happy to start this new career, but I have a passion for this job. I still love getting up and coming to work every day. I love it. I enjoy this job.”

What he won’t miss so much are the irregular hours. He is going to work at Citizens Bank – a 9-to-5 job. With four children – two sets of twins, ages 9 and 11 – the more predictable hours will be a godsend.

“It’s going to be great for my family,” he said. “That’s the most important thing for me, it’s my biggest motivating factor.

Chirnside, who’s been a detective for the past four years, is proud of the work he’s done as an EG cop.

“I was the one who pushed for technology changes over the years,” he said. “I wrote the grant to get us the first laptops in the cars.”

He also got the department to get pepper spray, initiated a bike patrol (dormant now) and pushed for the creation of the department’s first honor guard. One of his favorite aspects of policing was dealing with the community, which is why he championed the bike patrol.

“I’m a communications guy. Somebody on a bike is much more approachable to somebody walking down the street, or a neighbor or a resident, than someone sitting in a parking lot in an air-conditioned car with the windows up. It’s nice to get out there and have that interaction with people,” said Chirnside.

Detective work took him out of that role, to some extent, but had its rewards. Chirnside said he was very proud of the drug and narcotics arrests the department made during his years as detective, especially his work with fellow detective David Black. He cited the arrest of Robert Campellone and his two sons at their house on Adirondack Drive on felony marijuana possession charges, and the arrest of Rakeshkumar Patel, owner of East Greenwich Farms, for allegedly selling synthetic marijuana to an undercover officer.

“Like every other community, we’re plagued with drugs. We have young people dying. They have easy access,” he said. “Our housebreaks are committed by people that need money to get a quick fix. Granted you do have your professional thieves that come out every now and then, but for the most part, it’s an addict that’s kicking in the back door, breaking a window to get into a house, to feed their addiction.”

The toughest cases for Chirnside involved kids – “seeing lives ruined and ended when they didn’t need to be.”

The double-fatality on Shippeetown Road in February 2012 was particularly hard on Chirnside – both victims were from North Kingstown and he knew the families. The older sister of victim Maddie Healy had been one of his kids’ first babysitters. And the Chirnsides had routinely ordered birthday cakes from the mother of the other victim, Michael Ruggieri.

“Dealing with things like that, having that connection, that was a difficult stretch not just for me but for all of us involved,” he said. As detectives, “it’s our job to piece together the last 24-48 hours of a person’s life. In Maddie’s case – for all of them, wrong place at the wrong time – but for Maddie, she wanted to go home that night, but they talked her into going to breakfast at Denny’s,” he said.

“Those are the difficult parts of the job, but lots of fond memories too,” he said, including his nine years a the senior citizen police advocate.

“I enjoyed meeting with seniors and talking about safety and quality life issue and concerns. One of my most rewarding cases was of a resident of West Bay Manor, who was financially exploited by her niece’s husband, who had given himself power of attorney over her affairs. This resulted in her having to be evicted due to the fact that he spent all of her and her husband’s savings to live a life of luxury. Ultimately, he was prosecuted federally and received a decent sentence. This case propelled my interest in financial crimes, which now has helped position me for my new career in the corporate world.”