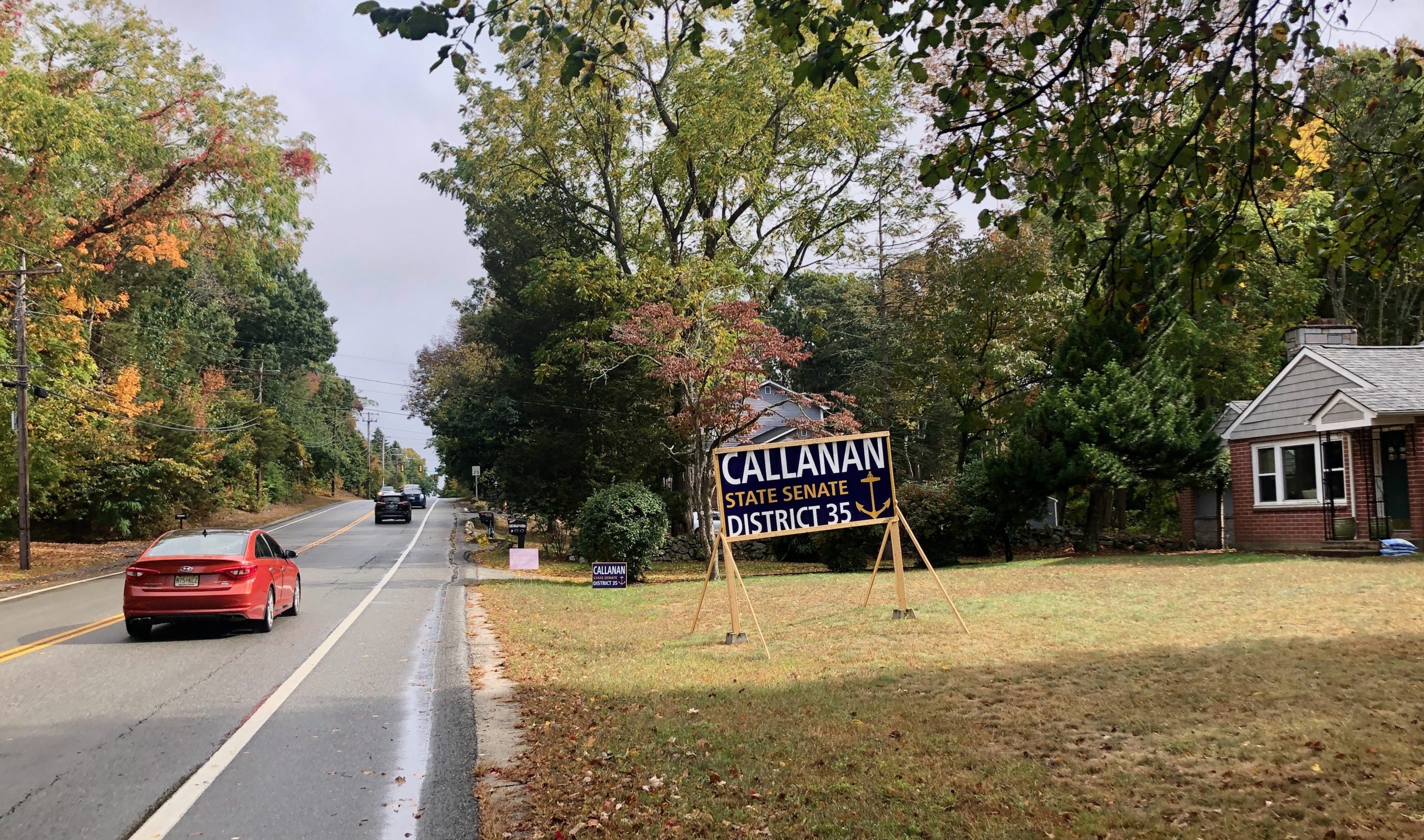 And the ACLU finds inconsistencies in EG’s sign ordinance … again

Last week, town workers removed a 4 foot by 8 foot sign endorsing Charles Callanan, who is running against incumbent Bridget Valverde for Senate Dist. 35, from in front of a house on First Avenue. They were following the direction of the town’s building official who cited the town’s ordinance on signs which says signs in front of residences can be no larger than 4 square feet (2 feet by 2 feet).

Callanan cried foul, saying his sign is protected by the First Amendment (free speech). And, he and the homeowner put the sign back up.

“You cannot regulate the size of a political sign,” he said. “People can put up with this for the 40 days before the election. It’s my fundamental right.”

Rhode Island ACLU’s Steven Brown, who has tussled with the town before over its restrictive sign ordinance in the past, did not entirely agree with Callanan, though Brown did say the town’s most recent sign ordinance runs afoul of the U.S. Constitution in two ways:

Indeed, because they are listed alphabetically, the two sections run one after the other (boldface added):

Any temporary sign advertising the real estate upon which the sign is located as being for rent, lease or sale. Residential real estate signs shall be permitted for individual residential properties and shall not exceed six square feet in area….

Any single-faced wall sign or freestanding sign in a residential zone, including, but not limited to, preservation plaques and bed-and-breakfast signs. Freestanding signs of this nature shall have an area not exceeding four square feet, shall be no greater than four feet in height overall, and shall be located a minimum of five feet from all property lines.

You can see a lot of political signs of this size around town.

“Overall, the ordinance addresses the majority of issues raised by the ACLU over the years except it includes that inconsistently we will need to address,” he said. Because of that inconsistency, “for this election period, we would not be enforcing square footage limits less than 6 square feet.”

This means Callanan’s 4×8 sign is still in violation. Nota said the town would act to remove that sign again.

“People think they can do whatever they want on their property and that’s not the case,” Nota said.

RI ACLU’s Brown concurs but he said the case law he has found would allow political signs on residential property of up to 16 square feet, or a 4×4 sign, bigger than is now allowed in East Greenwich.

“A constitutionally crafted ordinance could put limits on the size of signs, but East Greenwich has failed to do that,” Brown said.

He mentioned a caveat: “We haven’t done thorough research to see if there are any contrary cases that have struck down size limitations of that size. What we do know is that smaller ones, like East Greenwich’s, have been struck down.”

The RI ACLU has knocked on EG’s door about its sign ordinance two other times since 2004. That year, it told the town it could not place time restrictions on political signs – the ordinance had allowed signs only 30 days before an election – so that language was removed. Signs of a political nature can remain up year round, if a resident so chooses.

Then, in 2012, the RI ACLU said the town’s ordinance violated the constitution by banning political signs in areas where commercial signs were allowed and by having tighter restrictions on the size of political signs than on commercial signs. The Town Council approved changes to the sign ordinance addressing these concerns in 2014, though failed to completely fix the problem, as it turns out.