A Successful Season for the EGHS Indoor Track Team 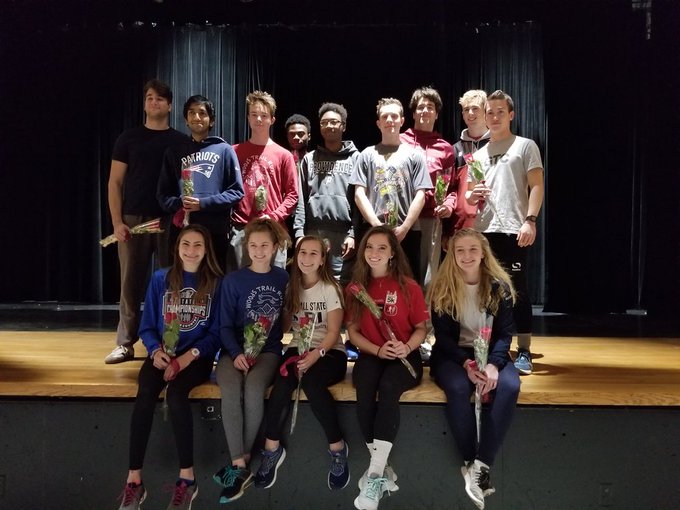 The EGHS Indoor Track Team has transformed itself from last year. In one of the most remarkable turnarounds in East Greenwich High School sports history, the boys finished second and girls third in the Division Championships. Last year, the boys finished third from last, and the girls barely better.

One reason for this year’s success is the sheer change in the number of athletes. The boys team has more than quadrupled in size due to a burgeoning freshman class. The girls team also grew.

“We had a lot of confidence going into the [District] meet,” said Lombardi. “We trusted our training and trusted what Coach Thibs did for us all season.”

Instead of gunning for dual meet wins, this year’s coaches (Michael Thibodeaux for distance, Ken Topalian for sprints/throwing, and Karen Lockhart for sprints) sought improvement. Even though this was the first year for both Thibodeaux and Lockhart coaching Indoor Track at the high school, they developed a strategy that propelled their runners to success. Through ‘tempoing” (racing at 80 percent of your maximum speed) the first part of each race and racing at maximum capacity at the end, athletes consistently built their endurance and speed, ultimately resulting in many personal bests.

Beyond the oval, however, a spirit of camaraderie and teamwork was another significant factor in the team’s success, said Boys distance senior co-captain Codey Thereault. “That’s huge on the team this year,” noted Thereault.

“It’s a strong group of kids,” added Boys distance senior co-captain Eric Essington. “We care about our sport and our team.”

That sentiment was reinforced by Girls distance senior co-captain Bryn Shunney. “The girls spend a lot of time together and have grown to love each other,” said Shunney. “We may know nothing about high jump or how to use a block start, but we will go wild each and every time because we are all Avengers.”

With a total roster of more than 90 on the team (the most in recent history), one might expect smaller factions or cliques to form. But on runs, there were no divisions by grade, or by seniority. Instead, freshmen ran with seniors, juniors, and sophomores alike, allowing the team to improve as a whole. No runner was left behind.

For a team that began the season believing their depth was a puddle, they can now revel in how it has grown into a pond. Dual meets have given them confidence; divisions have given them hope. And as they prepare for Class this Saturday and States the next, they are ready to make a run for a championship – just by exercising a little speed, in the midst of the slowest season.

Writer Suraj Sait, a senior, is also a member of the Indoor Track team.