A Shining Star for A Hidden Community 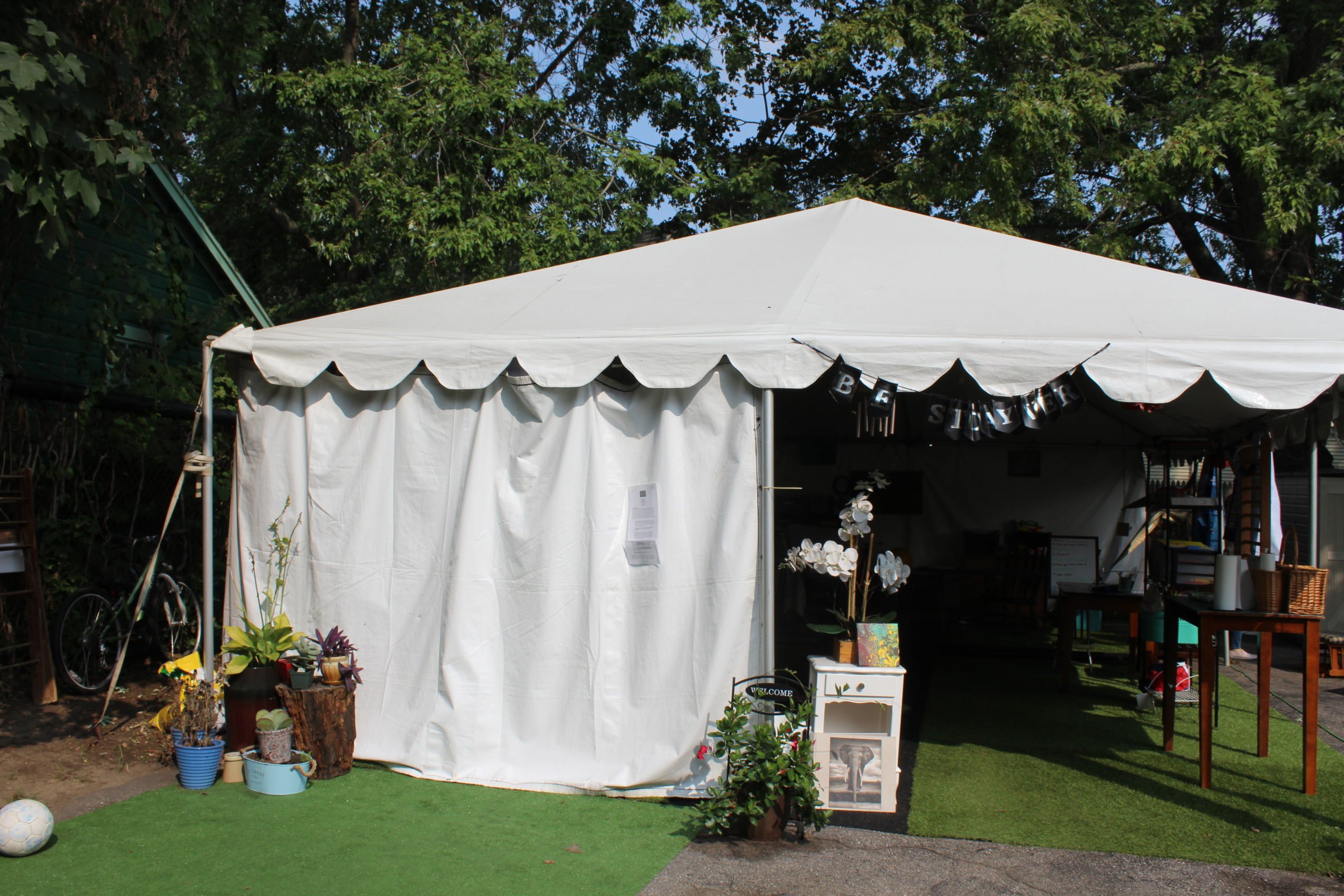 How one woman rescued children with autism

When the coronavirus pandemic hit in March, many of us felt like we were thrown headfirst into a nightmare. Days began to blend together as people were forced to stay home from work and school. The feeling of isolation began to gnaw at our mental health.

Giana Gray works with a student.

This wasn’t a new feeling for everyone, however. For families with children with autism and other developmental disabilities, the pandemic simply heightened the isolation ingrained in their day-to-day lives.

COVID-19 closed almost everything, including those facilities that offer vital help to families with disabled members. East Greenwich resident Nicole Bucka had to experience this double. She and her husband have two sons, ages 12 and 10, with autism spectrum disorders. Each boy normally has many hours of therapy a week, in addition to school. They both need a schedule, they have special dietary needs, and their younger son uses an iPad to communicate because he’s nonverbal. Bucka said this hectic lifestyle was normal for her. The pandemic, however, pushed her family to the limit.

“The pandemic pretty much put a stop to all of our kids’ treatments – medically necessary treatments, you know?” Bucka said. “All the mental health supports shut down, the schools shut down and people were pretty unapologetic about their inability to meet any kind of a need. Meanwhile, as adults, two working parents, we’re still expected to be working full time.”

A core need of people with autism is consistency – adjusting to change can be extremely difficult. The pandemic, of course, brought nothing but change.

“Then on top of that, if you add a child like mine who’s nonverbal, now you can’t even really explain why things are different,” Bucka said. “It’s more than just what we all are experiencing. Take what you and I are experiencing, and just exponentially blow that up.

Then, amidst the chaos and uncertainty, Bucka’s family got a lifeline.

Driven to help families in need

Giana, right, has worked with Rose for years.

Giana Gray has worked with kids on the autism spectrum for 18 years. A board-certified behavior analyst (BCBA), when the pandemic hit, Gray was working for a local agency with children with autism, providing Applied Behavioral Analysis (ABA therapy). ABA has been designated a medically necessary treatment and, since 2012, Rhode Island has required health insurers to fund this service. The therapy’s goal is to increase helpful behaviors and decrease harmful behaviors, encouraging communication.

In the early weeks of the pandemic, the company Gray worked for focused on its adult clients, leaving younger clients to be served through telehealth. That didn’t work well.

“Downtime for children is hard,” Gray said, noting that telehealth sessions were shorter and less frequent. “When you have someone who is nonverbal and doesn’t necessarily know how to engage safely alone … unsafe things started to happen. And I wasn’t allowed to go and be there for them. I’ve never started a relationship via telehealth and that was something that we were learning. We were building a plane mid-flight.”

Gray was working 16 hour days Monday through Friday, and putting in extra hours on the weekends. By mid-April, Gray felt the families she worked with were stable and she left her job and start a business, developing her own clinic to help children in need of ABA therapy. The pandemic might have pushed Gray to establish her own clinic, but it had been a dream of hers for several years.

Gray started Assent ABA. As a licensed BCBA, she has both a national provider number and a license through the state. But, to work through her own LLC, Gray had to send out all of her credentials for insurance reimbursement, a process that in normal times might take 4 to 6 weeks, but during COVID, it took 12 weeks. From April 18 to June 13, she provided her services via computer and phone with no reimbursement.

When the state began to reopen, an idea came to her one night: an outdoor classroom in the large driveway of her Cranston home.

She purchased a 20-by-30 foot tent (one big enough for 60 people) and decided she could hold a class with up to 10 people. Everything got delayed when her basement flooded – “It’s 2020. I don’t know how else to explain it!” she said of the flood – but school started for one student in June. In July, two more children joined the class.

As each child got comfortable, Gray hired more staff. “The plane would not have flown if it was just me,” she said. “This job is eight hours of cardio. It’s a lot of fun, we have a good time but it’s a lot of movement. A lot of physical and mental work.”

Mia Gemma is one of Gray’s hires. She’d been working in the ABA field for more than five years when she learned about Assent ABA and felt the timing was perfect.

“As a nonprofit, Assent ABA’s mission puts the best interest of the children first – something I’ve longed for in this emerging field,” Gemma said.

Gemma first met Gray at a CrossFit gym back in 2015 and Gray had left a lasting impression.

“Her work ethic and leadership carried over to her professional career, where she continues to mentor and inspire her team,” Gemma said. “She fundamentally demonstrates the integrity of someone with the best interest of her employees and clients in mind.”

Dealing with the kids’ regression

The months the students went without treatment caused a lot of regression, including for Bucka’s sons. She said both of them were in a form of crisis when summer started. Her older son was struggling with his mental health and his behavior was taking a negative turn. There was no one to help.

“I called all the places that are part of my team and they’re all like, ‘Sorry, COVID! Can’t help you” she said. “I’m in crisis, and then [Giana Gray] is just like, ‘Nope, that’s not an acceptable answer. Let’s do something different.”

Bucka said not every ABA provider is the same, and she cherishes Gray’s work, saying Gray is the most eclectic ABA provider she’s ever met.

“She’s very flexible,” Bucka said. “She takes things from other fields of autism work and she kind of puts them all together.”

Along with a tent, Gray purchased a second roof and siding in preparation for colder weather. She has no intention of shutting down as winter nears. That’s forcing her to get creative. The roof and siding will protect the tent from rain and snow, and she also reached out to a firefighter she knows in order to safely install space heaters and insulate them so none of the children get intrigued and try to get near them. She has worked with the City of Cranston to make sure the set-up meets regulations.

On top of taking on this venture, Gray also cares for her father, who has Parkinson’s and Lewy body dementia. She said his safety is her concern as well, but she has two separate entrances and a detailed COVID preparedness plan for everyone involved.

She admits under any normal circumstances she would never think to build her own clinic in her driveway.

“My neighbors are so sweet and wonderful. I’ve been here for 10 years and it’s been very quiet, and it’s no longer quiet Monday through Friday, 9 to 3. They’ve been so sweet, they’re bringing me flowers and cookies and donating blankets. I’m very, very stressed out, but I couldn’t be more lucky to be where I am,” she said.

Inside the tent, plants, books, colorful toys, and corners for each child make it feel homey. Carefully crafted schedules keep everyone on track. The children move easily from activity to activity, comfortable in this makeshift classroom.

“My youngest who’s going to Giana’s clinic five days a week is doing very well,” Bucka said. “I wouldn’t say that we’re making up ground yet, but he has adjusted to being there and he is used to doing something outside the house again – and he’s not stressed.”

“At the end of the day when their parents come to pick them up, they don’t want to leave,” she said. “And I’m like, guys, I need to eat dinner, I need to take a shower! But that’s the most rewarding part – that they’re not afraid to be here.”

Hope for a permanent clinic

Gray’s ultimate goal is to find a permanent facility for her clinic, do it as safely as possible, and hopefully never have a clinic in her driveway ever again, she added with a laugh.

“It would be ideal to be in a space where there’s options for inclusion for neurotypical peers, options for a lot of open windows, especially if we have another mild winter,” she said.

Now that schools are reopening, there’s been a shift at Gray’s clinic. While children with disabilities have been prioritized for in-person learning, Bucka said it isn’t that simple for her younger son. He can’t socially distance or wear a mask all day. He also has “stims,” short for self-stimulatory repetitive behavior, and one of them is licking his fingers. Bucka knew it made no sense to send him back to in-person school.

Shedding light on this hidden community

From the outside, it can seem like dealing with these kids is all struggle. Gray and Bucka strongly refute that idea.

“The kids are the easiest part of the job,” Gray said. “They’re very affectionate and bright little people in their own way, and they’re making so many strides.”

Because each child’s accomplishments are often hard won, Bucka said they have extra meaning.

“It’s very hard to put into words how proud you are when they accomplish something that we all take for granted, but they had to be explicitly taught and practice it for years,” said Bucka. “It’s just amazing. They work harder than anybody I know.”

Bucka said Gray really gets the isolation many families raising children with autism may feel.

“When other parents go to a ball game, they sit and chat with each other, right?” she said. “I can’t do that. I have a nonverbal child that I have to follow around because he’s a danger to himself. So, I don’t get to sit down and get to know people and meet them, and a lot of community events are too big and too busy and overwhelming. So, it’s kind of an isolating life and it’s okay, I’m used to it, but Giana really understands things like that and she really hopes that her clinic becomes a community.”