A  Killing in the Shanty! 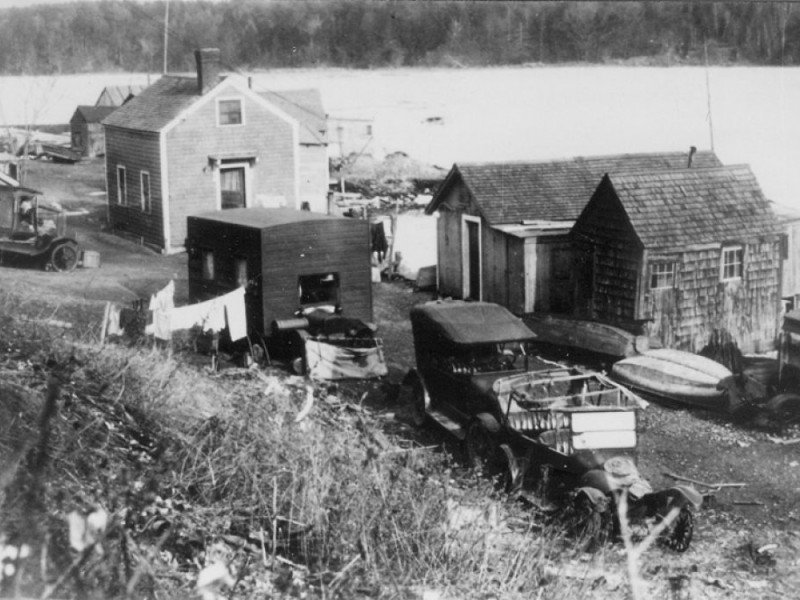 Who, besides The Shadow, knows what evil lurks within the minds of men? Some people are just born plain mean, and sometimes, plain mean can lead to evil. They feel evil gives them power, and that they can get away with anything.

Pretty soon that’s exactly what they try to do. Get away with anything. And everything!

The Canuck was one of those people. He was big, tough, raw-boned and mean and always stepping over the line to try and get away with whatever he could.

He was one of the first “hauggers” to take underwater scuba gear and dig quahaugs illegally down in the briny deep away from the watchful eyes of the ever-vigilant deputies.

You met him in an earlier episode when he took a shotgun and tried to shoot a fly off the leg of Jerry the Hump. The result was that he blew Jerry the Hump’s leg off from the knee down making him Joe Hump the Stump.

Nothing seemed to faze The Canuck. He would curse you, or fight you,or cut you, or shoot you and think nothing of it. That’s just the way he was.

The Canuck served some time for shooting Joe Hump, but, like many of the “wild ones” down by the shore, it was probably more like a vacation, with a warm bed, shower, three squares a day, some exercise and card playing and a bunch of guys to talk to, or fight!

Anyway, at some point in time The Canuck was right back at The Shanty. This time with a buddy from Down South, Bubba Billy from Georgia. Jerry the Hump was there and another guy name of Jimmy Hardshanks.

Again they were drinking and playing cards. And arguing. It seems that arguing is almost like a sport to some people. But, arguing can lead to other things.

And, in this case it did.

Like many a man, The Canuck fancied himself quite the card player. He always wanted to win. He did not like losing. In fact, he hated it!

It came to a point where he and Hardshanks got to arguing. First verbally. Then more strongly. Then a little physical push and shove.

Well, you didn’t push The Canuck. Hardshanks did it one time too many. The Canuck pulled out a pistol he had stuck under his belt and fired two shots into Jimmy Hardshanks.

One shot struck him in the stomach and the other in the forehead. He went down like a runaway elevator and was dead before he hit the floor.

The Canuck fired a couple of more shots wildly and hooted like a crazy man.

When the smoke had cleared, Jerry the Hump was gone. He broke out of there like a hunted deer. Remember, The Canuck had shot him once before in a disastrous manner. Jimmy Hardshanks lay dead. The Canuck’s friend Bubba Billy from Georgia was down also. Seems one of the stray bullets struck him in the hip.

The Canuck wasted little time. He took an old rug, and rolled Jimmy Hardshanks up in it. Then picked the bundle up and threw it in the corner. He then helped Bubba Billy up and took him to his beat up car, opened the door and threw his friend from Georgia in the front seat.

He then drove up to Kent County Hospital, reached across Billy Bubba, opened the door and kicked Billy Bubba, screaming, out onto the parking lot in front of the Emergency Room. He then drove off like a bat out of H-E double hockey sticks and made his escape to lay-low territory.

Yes he did, people. And, it all happened here. Right here in little, old East Greenwich, smallest town in the smallest state in the Greatest Country on God’s Green Earth.

The story is true. I changed the names of the characters and used my wonderful imagination for some details, as I was not there. However with the help of a couple of law enforcement buddies, and the recollection of some oldtimers, I pieced enough together to give you another timeless story from old EG.

The Canuck was eventually caught and sent on another vacation to the ACI. This time the “vacation” was a little longer. He got out and has since passed away to try scuba quahaugging in his new home. I hear it is pretty hot down there though and there are NO quahaugs. Just the illusion of them. You did and dig and fill your sack but at the end of the day it is still empty!

The EG police tracked Bubba Billy down in Oregon, where he had fled to after being stitched up at KCH. He was afraid of The Canuck, and rightfully so, as TC had threatened quite a few people with harm (this writer included) if they ever told on him OR wrote any stories about him or the two incidents.

I want to thank the Caddie Cop – Billy G.-  for his memory and all his help in putting this together. Though this is not the story I was going to use to kick-off my return, it looks like I am back. Did this story in just under an hour.

Hope you liked it.