A Great Night on the Town 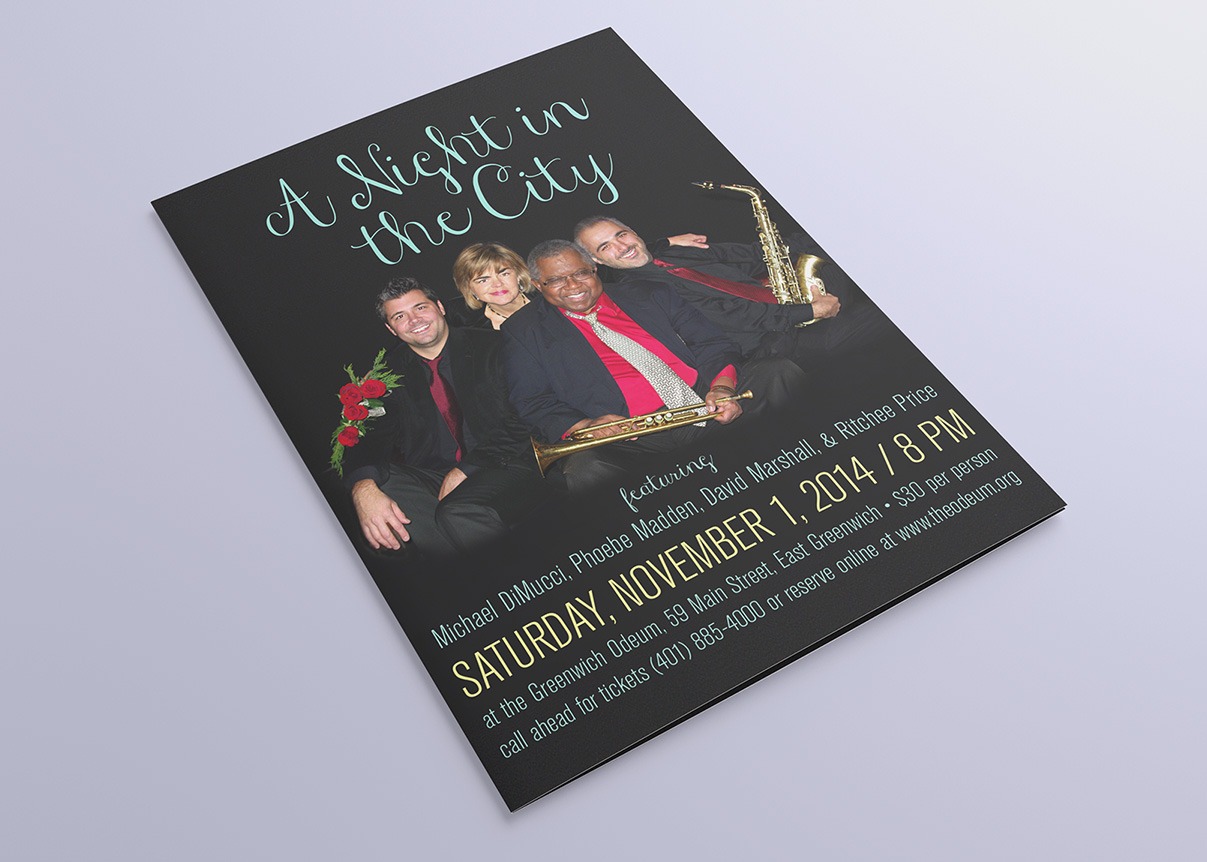 I’m not a writer. I’m not a musician. I didn’t even stay at a Holiday Inn Express last night. But I was inspired to document the experience my wife and I had Saturday evening at the Greenwich Odeum by “A Night In The City,” a show made up of choice tunes from Broadway musicals, interspersed with other entertaining numbers having ties of their own to the Big Apple.

We didn’t purchase tickets ahead of time; we weren’t sure we would even go. Dinner and a babysitter are expensive enough. We were not sure we wanted to spend another $30 per person for a night on the town.

We started with dinner at the Greenwich Bay Oyster Bar. We’d been there a few times before and thought we would try again to see if it’s really as good as every other time we’d been, or had we just been lucky each time. It was another home run. We were pleased to see some familiar faces there, and had come nice conversations before settling into dinner at the bar.

John was a fantastic bartender – attentive and knowledgeable. Rather than let us each order the Baby Spinach Salad with crumbled gorgonzola, dried cranberries, and a tomato vinaigrette for a starter, he coached us into a single order because it’s so big. While some places would frown on losing the extra order, good restaurants know that returning customers will bring a lot more money than short-term gains from allowing customers to over-order. Thanks, John!

Carolyn ordered the Pumpkin Ravioli special topped with seared scallops. She normally shares. She did not on Saturday. I had an appetizer special for my main course. It was a “cake” trio – one crab cake with spicy aioli, one stuffie, and a delicious salmon cake in a creamy dill sauce. All three were delicious, but my favorite was the chorizo-spiced Stuffie. I shared . . . reluctantly, and really only because I was still too full from Halloween candy. Carolyn favored the salmon cake.

During dinner we decided we would stop by the show in support of both the Odeum and local artist Phoebe Madden. We hadn’t been there since the grand re-opening almost two years ago and I’ve been feeling a little hypocritical that I (mostly passively) supported the efforts to restore and open it, but have not taken advantage of its presence since. It went unsaid, but I had in the back of my head that we could always sneak out early if we wanted, right? Spoiler alert. We didn’t!

I was amazed at how quickly the two hours went by. It was broken up with a 15-minute intermission.   And, yes, there was a cash bar available. Their playlist was lively and diverse. There was something for everyone. Broadway musical numbers highlighted Madden’s extraordinary talent and incredible passion for performing, while tenor singer Michael DiMucci brought the 140 attendees, including former Governor Don Carcieri, to their feet with his Italian opera piece – not something I would ordinarily be partial to, but to see it performed like that in person and in such an intimate setting was really tremendous. Mr. DiMucci also reflected on the influences from the likes of Billy Joel, Tony Bennett, Paul Anka and Frank Sinatra. His versions of “My Way” and “New York State Of Mind” were particularly memorable. David Marshall also helped make the night with his mastery of the alto saxophone, but his fingers can also find their way around the keyboard pretty darn well too, and he can also sing with the best of them. And Philip Martorella was also a strong presence with his solid piano accompaniment.

Keeping rhythm for the evening was Brandon Carrita on drums. EGHS Senior Adam Sticca warmed up the crowd with some Billy Joel, and Berklee freshman Alyssa DiMaio entertained during intermission. Backup singers Sophie Rodgers and Kayla Carcieri Cassidy (both students of Madden’s) were a big hit with the crowd in their Odeum debut, and we hope to see more of them in the future!

Perhaps the biggest surprise of the night for me was the charismatic trumpeter, Ritchee Price. The elder statesman of the group, Price has travelled the world with the Lionel Hampton Orchestra, including an appearance at the White House during the Reagan administration, and he toured with the Count Basie Orchestra culminating in a final performance at Carnegie Hall. In addition to his trumpet, he entertained everyone with stories of his past and his scat singing, but most of all I loved his solo performance of “Somewhere Over the Rainbow.”

When you put all of this talent together, I feel fortunate that we were even able to get tickets at the last minute. I shudder to think that we almost missed the opportunity to be swept away by their music for a couple of hours, and felt compelled to spread the word so more of you will have the opportunity next time. There was no better example of what this talented group can do together than their ensemble rendition of “Seasons Of Love” from the musical, “Rent.” I saw the original version of this show on Broadway and own the soundtrack, and this version still gave me goosebumps. It was my favorite song of the night.

Sixty dollars for “A Night In The City” was a small price to pay!