A Day to Remember

Above: Ships burn on Pearl Harbor’s Battleship Row the morning of the Japanese attack; the USS Arizona is in the foreground.

Editor’s Note: Dec. 7, 2021, marks the 80th anniversary of the surprise attack by the Japanese on Pearl Harbor, a major U.S. Navy base in Hawaii. The attack killed 2,400, destroyed much of the Pearl Harbor fleet and catapulted the U.S. into a war that had already engulfed Europe and Asia, a war that would become known as World War II. Below, East Greenwich native Don Rice recalls the day, one then-President Roosevelt said would live in infamy.

My earliest datable memory concerns an event that occurred eighty years ago today on December 7, 1941. I can remember some other things that I believe happened before then, such as when my Uncle How bent over and plucked a wriggling green snake out of the grass in front of our house. And I have a particularly clear mental image of sitting on the running board of a black car near a stream. But I can’t date those moments.

December 7, 1941, however, is fixed sharply in my mind. It was a typical December day—cold and cloudy. We had no central heating in our upstairs apartment on Castle Street and relied on the black stove in the kitchen for warmth and hot water. That Sunday afternoon we were all in the parlor listening to 78s on the phonograph my father had made. (He could do things like that.) I was on the floor with a coloring book and crayons, close – but not too close – to the portable kerosene space heater in the middle of the room. My brother, Clifford, who was barely eight months old, was in his playpen.

If you didn’t have your radio on, and if no one called you (which they couldn’t because we didn’t have a phone) there was no way to know what was going on in the outside world, not that it usually mattered. It was around 2:30 in the afternoon when Charlie Daylor, who lived downstairs, yelled up to my parents. I can hear him still.

My father rushed to turn on the radio. An announcer was excitedly repeating that same news. I didn’t understand the details, but they must have been horrific because my parents were terribly agitated. My older sisters, Marilyn, age eight, and Barbara, age ten, were both crying, totally caught up in the terror of the moment. I was three-and-a-half and I’d never seen adults so out of control. It was truly scary.

During my short life there had been war news on the radio every day. Whenever I visited my grandparents next door, my grandfather – who was born in Nottingham, England and came to this country as a young man in 1908 – always sat transfixed beside the radio. From the news I had somehow picked up that bombs meant explosions. What I couldn’t understand – and what made this moment so indelibly etched in my memory – was the reason for the hysteria, and it made no sense at all. No one, of course, bothered to explain to the bewildered little boy on the floor what all this meant, so I tried to sort it out for myself.

There was an old lady who lived across the street named Pearl Hay, and in my mind the reason everyone was acting hysterically was because another old lady named Pearl Harbor had exploded. By the next day I had a slightly better understanding of what had actually happened.

Forty-nine million men between the ages of 18 and 37 were registered for the draft. Ten million of those were inducted. In all 12,209,238 Americans served in the armed forces, around 350,000 of whom were women. My father, a 33-year-old veteran of the Rhode Island National Guard, was one of those left behind. Charlie Daylor joined the Navy and when the shooting stopped returned home safe and sound.

Donald Tunnicliff Rice is a freelance writer based in Columbus, Ohio. His latest book is Who Made George Washington’s Uniform? Above: Tom Greene in November.  Tom Greene, one of the last living descendants of Nathanael... 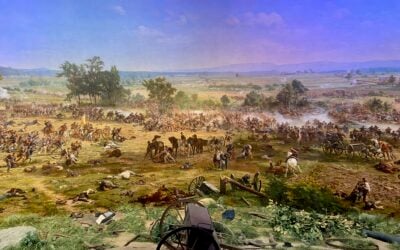 Befriending the Man Who Killed You

Above: From the painting known as the Gettysburg Cyclorama, painting by Paul Philippoteaux in... 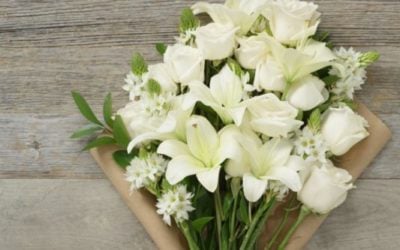