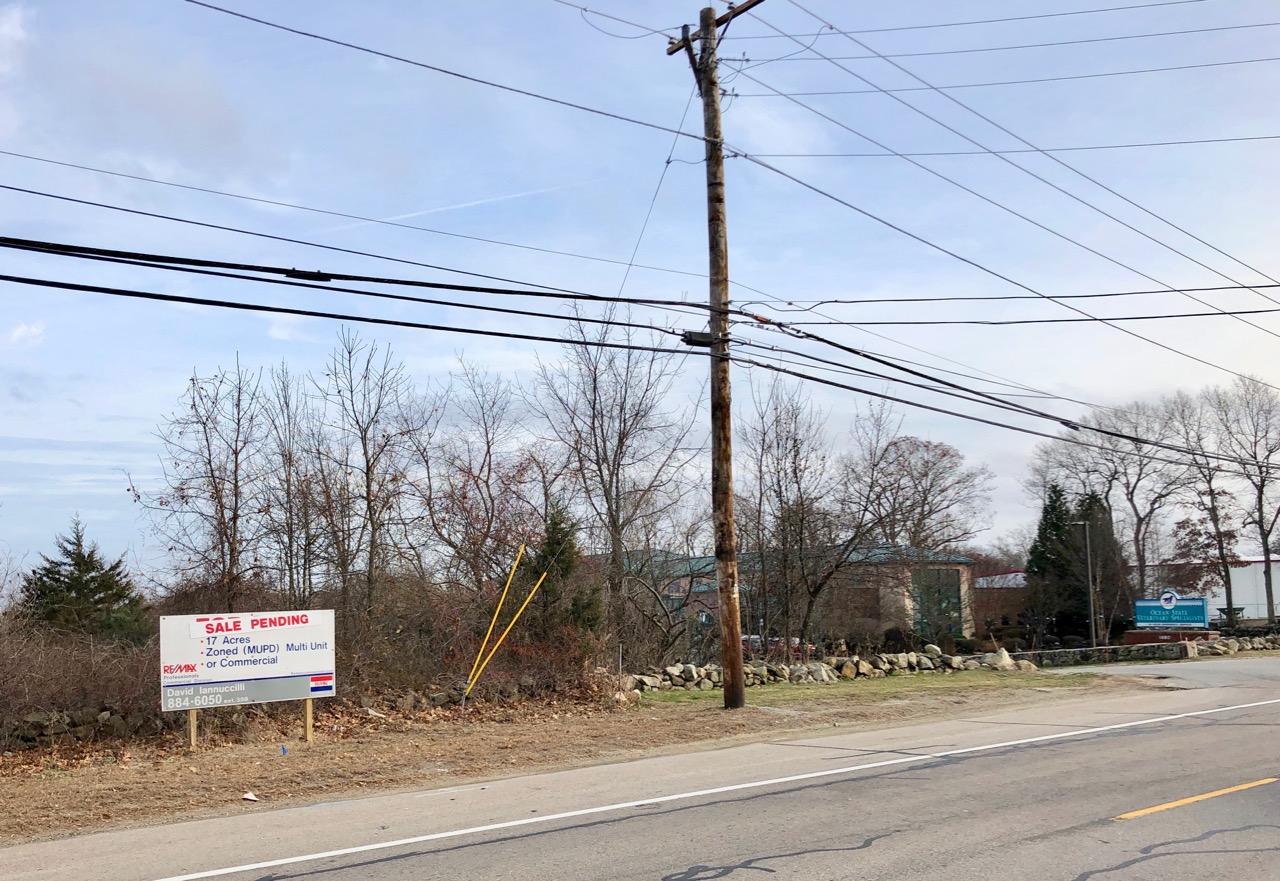 A proposal to build 96 apartments on South County Trail has passed through initial hurdles, with the Planning Board’s approval of its master and preliminary plans in November. All 96 units – in a complex called Brookside Terrace consisting of four apartment buildings and a separate “clubhouse” – would be what the state deems “affordable” (that is, 80 percent to 120 percent of an area’s average mean income*).

The approvals follow four public hearings before the Planning Board.

The parcel of land, 1470 South County Trail, lies north and east of the Ocean State Veterinary Specialists and behind the Lifespan Cardiovascular Institute.

The proposal comes from Dakota Partners in Waltham, Mass. The property, now vacant land, is designated in the town’s Comprehensive Plan as “appropriate for high density residential development” and was also named in the plan as a possible site for affordable housing units.

A state law passed in 2004 required that by 2025 at least 10 percent of a town’s housing units be affordable. East Greenwich, which currently has 4.7 percent state-classified affordable units, has been making very slow progress to that goal, partly because for every affordable unit built, there are usually more market-price units built. The proposed 96 units would boost EG’s percentage to 6.4 percent, a marked increase hard to attain through the types of developments usually proposed in town.

The developer is seeking permission through what’s known as a Comprehensive Permit, one open to any developer with a project that has at least 25 percent affordable units (the town requires all projects to have at least 20 percent affordable). It’s an enticement since it streamlines the approval process. As such, the Planning Board has total control over the proposal – in this case, it would act as both itself and as the Zoning Board.

Because these would be rental units, they are not subject to the same development impact fees normally required by the town for new housing projects. Impact fees are meant to compensate the municipality for everything from increased road use to more children in the schools.

According to a study by the developer, the complex (with 74 two-bedroom units, 24 one-bedroom), could expect five children total, but it’s impossible to say how many people with school-age children would actually move in making it equally difficult to gauge the impact on town schools.

Down the street at 2880 South County Trail, there is a 10-unit East Greenwich Housing Authority complex, 8 of which have three bedrooms, 2 have two bedrooms. According to the School Department, 10 children from that complex are currently enrolled in EG public schools, a “very different metric,” the Planning Dept. report noted, than the developer’s .05 per unit.

The Planning Board allowed the developer to go for master plan and preliminary plan approvals simultaneously, so the developer could meet a December deadline to apply for state housing credits needed to make the project a go.

Planning Board Chairman Jason Gomez said they made that decision to maintain some control over the project.

“Is it better to approve with conditions that we have some control over or have the proposal appealed?” Gomez said after their meeting Nov. 28. “We don’t have any legal standing to deny it.”

That’s because the property was already designated by the town as appropriate for both high density and affordable housing. The only way the town could reasonably deny such a project, officials say, is if it already had 10 percent affordable units, which it does not.

The project owns the land used by abutter Ocean State Veterinary Hospital to gain access to South County Trail. Under the agreement, Brookside Terrace would would grant OSVH an easement.

Developers have already done extensive engineering for the project as well as a traffic study that was peer-reviewed by the town. The Planning Department report stated, “While staff shares the grave concerns about traffic volumes and speeds on Route 2 and about the performance of signalized intersections, our expert’s fundamental conclusion was that while South County Trail [Rt. 2] already has issues in these areas, ‘the impacts associated with the projected site traffic will not significantly affect delays or current levels of service.”

The developer still needs final Planning Board approval, which will depend on whether or not the project obtains financing.

If you like reading EG News, consider supporting us with a donation. Click on the link below or send a check to EG News, 18 Prospect St., E.G., RI 02818. Thanks!