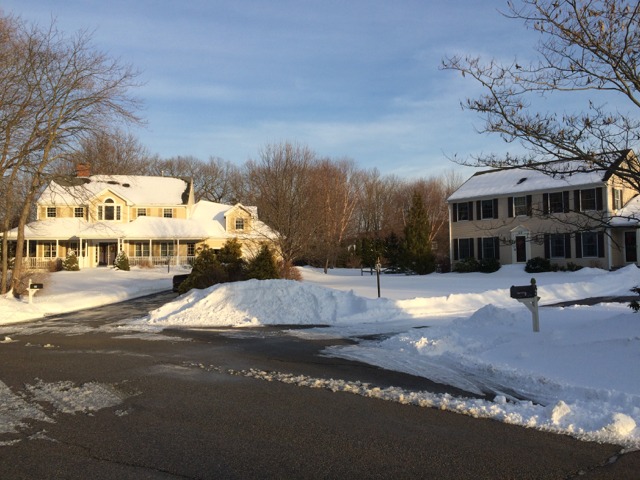 Two of the three homes on Sarah’s Trace in which the owners are suing the town and school district over damage from construction of Cole Middle School. The school sits just beyond the trees between the houses.

The six Sarah’s Trace homeowners suing the town, the school district and various construction-related companies have subpoenaed nine people so far in a lawsuit over the construction of Cole Middle School due to go to trial March 2.

The homeowners say construction of the new Cole Middle School caused cracks in their walls and foundations, threatening the structural integrity of the houses.

Construction on the new school begin in fall 2009. Homeowners Chris and Sue Lamendola, at 50 Sarah’s Trace, and Tom Hogan and Cynthia Pelosi, 40 Sarah’s Trace, sought help from the town early on, after they said they noticed cracks in their homes. They went public with their complaints in November 2012, filing a police report to document to the damage.

The Lamendolas and Hogan/Pelosis filed their lawsuit in February 2011, with plaintiffs Keith and Wendy Amelotte, at 35 Sarah’s Trace, signing on a short time later.

Supt. Mercurio said he wasn’t surprised by the subpoena.

“I was assuming that the players that were involved would be asked,” he said. “It wasn’t something that I expected but I wasn’t necessarily surprised.”

Guliano, alternatively, said she was surprised, if only because she had not heard a trial date had been set. The date was announced in October.

Winters, Guliano, Durant and School Committeewoman Deidre Gifford were all on a list from the plaintiffs from 2012 to be deposed. Gifford was the only one of that group who was never deposed. Records was not on that list but was subpeonaed.

“That was strange to me,” said Winters.

It’s unclear why lawyer Matt Oliverio was subpoenaed since he would be shielded from testifying due to attorney-client privilege. Both Oliverio and David Maglio, lawyer for the homeowners, did not return phone calls.

The complete list of those subpoenaed as of Feb. 10:

Bob Durante – member of the School Committee from 2008-12