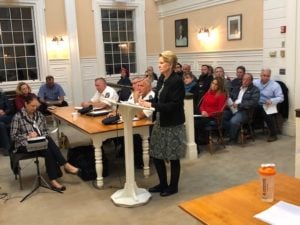 On Tuesday, Dykeman and Town Manager Gayle Corrigan refused to clarify the discrepancy.

The $800,000 difference cannot be explained by referring to the abbreviated report submitted to the state. Releasing the town’s fourth quarter data would probably clarify the discrepancy but Corrigan, backed by Town Council President Sue Cienki, has declined to hand over fourth quarter data for 2018 (which ended June 30). She told the Town Council at its last meeting, Oct. 22, that the finance department was working on the audit and she did not want to release unaudited data.

When municipalities miss deadlines for filing financial reports, the task of enforcing state law falls to the state’s Department of Municipal Finance.

“If a statutorily required report is not submitted on time, the Dept. of Municipal Finance follows up with a municipality until the overdue report is submitted,” said DMF spokesman Paul Grimaldi Tuesday. “There is some leeway given to them if we know they are working toward getting them to us,” he said.

Grimaldi would not comment on the specifics of East Greenwich.

For example, neighboring North Kingstown has not submitted its 2018 fourth quarter report to the state but Finance Director Jim Lathrop presented a fourth quarter update for the NK Town Council in July (NK June Budget Report 2018).

Lathrop said North Kingstown also has a citizen audit committee that meets every two weeks this time of year to get an update on the year-end audit. East Greenwich has no such committee.