5 Named to EGHS Wall of Honor, Including Carcieri, McMullen & Rigg 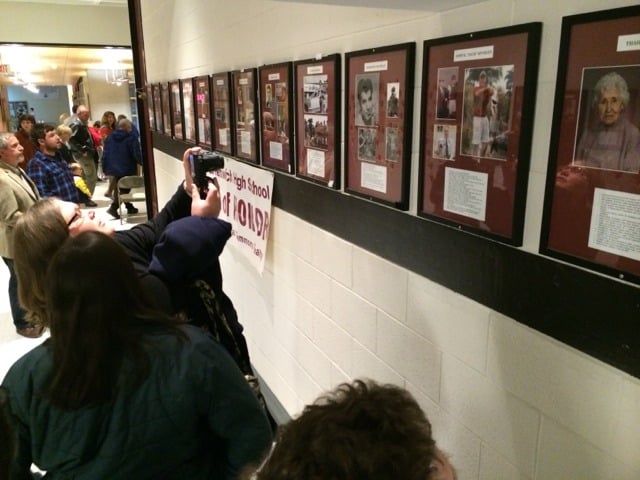 Of the five graduates named to the East Greenwich High School Wall of Honor for 2015, one is the former First Lady of Rhode Island; one is perhaps the winningest coach in EGHS history; one has been music director at St. Luke’s Church for 50 years; one was a 1894 graduate of the EG Academy; and one, chosen as Most Dependable by his EG Academy classmates in 1941, went on to serve as Town Council president, town treasurer, and tax collector.

The EGHS Wall of Honor celebrates graduates of both the East Greenwich Academy and East Greenwich High School in a ceremony in the spring. The ceremony takes place Wednesday, April 15, at 6 p.m. in the auditorium at EGHS.

Fred I. Brown graduated from East Greenwich Academy in 1894 and Wesleyan University in 1898. He established the Brown-Howland Company in six cities. In 1929 he joined Bostitch. While he was there, Bostitch grew to a world-wide leader in its field. Brown was then named sales manager for Bostitch and all its associated companies. He served them for 20 years retiring as vice president and sales manager for the company.

Otto Olson graduated from East Greenwich Academy in 1941, named Most Dependable by his classmates. He was an Eagle Scout for Troop 2 E.G. Olson served in the U.S. Navy from 1942-45 as an aviation metalsmith and after the service attended from Bryant College, graduating in 1953. After graduation, he joined the East Greenwich Savings and Loan. When EG Savings & Loan became Old Colony Co-op Bank, Olson was named branch manager. He later became an assistant vice president for Old Colony. Olson served as Town Council president; Town Treasurer and Tax Collector and was a member of the Republican Town Committee. He was a recipient of the American Savings and Loan Achievement Award and the J.C. Penney Achievement Award. In retirement, he won blue ribbons for his salt collections at State Fairs around New England.

Priscilla Adams-Rigg graduated from East Greenwich High School in 1947. Her first job was providing music for Quidnessett Baptist Church. Later she became Director of Music for Naval Chapel at Quonset Point. She has been music and choir director at St. Luke’s for 50 years. Among her many achievements, Rigg initiated the chamber music series “Music on The Hill,” brought the Royal School of Church Music program to St. Luke’s, and directors an ecumenical bell choir. She has taught countless children how to sing over the years and still today runs a vibrant children’s music program.

Suzanne Owren Carcieri will join her husband, former Gov. Donald Carcieri, on the wall. A 1960 graduate of East Greenwich High School, Carcieri  won the title of Miss East Greenwich that same year. She attended URI on a full four-year state scholarship, graduating in 1965. Carcieri was involved in many activities as she raised her children, among which were the Christian Family Movement, East Greenwich Academy Players, Our Lady of Mercy Choir, the Indian Education Center. In 1970 she earned her Masters degree in health education from Rhode Island College. In 2002, she became the First Lady of Rhode Island, where she participated in many programs including Statewide Wellness, the Celebrate Rhode Island Ball, the R.I. Science & Engineering Fair, the Task Force to Prevent Substance Abuse and State Schools Reading Program. Carcieri has been presented with The American Heart Association Gold Heart Award and the University of Rhode Island Distinguished Alumni Award.

Debra Sylvia McMullen, 1983 EGHS grad, is, arguably, the most successful coach in Avenger sports history. Her field hockey teams have won five state titles and 8 division championships. Her Girls Basketball teams were state finalists twice and quarter-finalists once. She has also served as Athletic Director at EGHS and started both field hockey and basketball camps for local athletes. As a student at EGHS, McMullen played field hockey, basketball and softball, winning State and Division honors in all three. In 1983 she was The Crimson “Athlete of the Year.” She has won numerous state honors for her coaching both in field hockey and basketball and in 1995 was the second woman to be inducted into the East Greenwich Athletic Hall of Fame. Her successful coaching has helped her athletes to get recognized and recruited by colleges, many of them Division One schools.

The Wall of Honor Committee is always looking for possible honorees. If you know of an East Greenwich graduate who has gone on to greater success in life and feel they would be worthy of consideration, please contact Bob Houghtaling, committee chair at 230-2246, or Bruce Mastracchio, nominating chair at 885-3160.