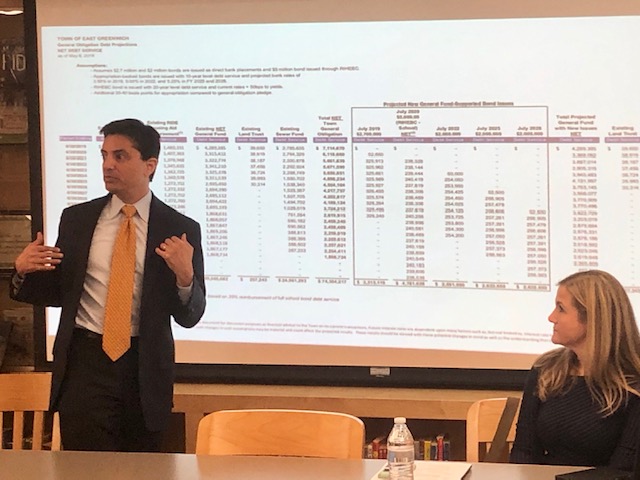 More than 35% would be reimbursable by state.

The School Committee laid out its case for the $5 million capital bond referendum that goes before East Greenwich voters Nov. 6 at a special session Tuesday, highlighting both the need for money to fund capital projects and the advantages in investing in capital now.

The average age of EG school buildings is 62 years. Committeewoman Alyson Powell, chair of the Buildings Committee, said the state’s 2017 Jacobs Report classified five of the district’s six building as “below average,” with Cole Middle School (opened in 2012) the lone standout. The state report identified $43 million worth of maintenance work needing to be done in the district.

Meanwhile, the School Committee has been budgeting $300,000 or less a year to spend on capital repairs and improvements. Taking out a bond – where you borrow money much like a mortgage that you pay back over time, with interest – would enable the district to make what the School Committee called necessary “safety, security, and accessibility upgrades.”

The list of proposed projects (find it here: Bond List ) is long and includes things like replacing bathroom original fixtures (i.e. toilets) at the high school and replacing ceiling tiles at Eldredge. There’s also a bucket of money for each school for security upgrades, the details of which are being kept confidential.

The specifics of what’s on the list matter because the state Dept. of Education (RIDE) will reimburse the district for a percentage of what it spends on RIDE approved items. In recent years, RIDE has reimbursed district 35 percent of capital spending. Because of a statewide bond that passed last November to address deferred maintenance at all schools, RIDE will be reimbursing at a higher rate, as much as 52 percent of costs. 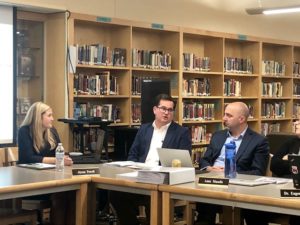 Not all items on the EGSD list are RIDE reimbursable, including five trucks, but according to Powell, more than $4 million is earmarked for projects that are reimbursable.

“We have a real urgency to pass this bond but we also have an opportunity,” said Chairwoman Carolyn Mark on Tuesday, referring to the need in terms of urgency but that higher reimbursement in terms of the opportunity.

Powell noted that East Greenwich gets less in state aid for education than just about any community in the state and that this was one way for East Greenwich to get additional state aid, especially since RIDE is reimbursing based on the project, not on the community.

“We won’t get less just because we are East Greenwich,” Powell said.

Financial consultant Mike D’Amico, addressing how the bond would affect the town’s overall financial picture, said the impact of the bond was budget neutral, with a yearly cost of around $240,000 from 2021 to 2040. It’s budget neutral because the school district’s budget line for capital spending went from $300,000 to $50,000 this year, essentially “saving” $250,000. As Committeewoman Anne Musella pointed out, the only way it remains budget neutral is by keeping that capital spending budget line at $50,000 in years to come.

Because deferred maintenance has become such a huge issue statewide, RIDE is requiring districts to devote a higher percentage of their budgets to capital spending, going from 1.5 percent in 2020 to 3 percent by 2023. That’s $1.3 million by 2024. Right now, the only way the district comes up with that money without extensive cuts elsewhere is through a bond.

Parent Katie Keefe asked why the district wasn’t asking for $6 million or $7 million, considering the $43 million in needs highlighted by the state report.

D’Amico said one reason was that idea to keep the borrowing budget neutral. The other was that it takes time to spend bond money. Case in point, the district only just this past year finished spending the last of the $52 million bond voters approved in 2008 to build the new Cole and other school projects.

Committeewoman Musella asked how voters could know the $5 million would be spent as has been outlined.

“If we don’t spend the money on the things we have laid out, RIDE would not reimburse us,” said Wilmarth. Chairwoman Mark said, too, said it would be illegal to spend the money any way not outlined in the actual language of the referendum, which refers specifically to:

“It is not without risk,” Mark said, about the strategy to cut the capital budget line in anticipation of the bond passing. If the bond fails, they would try to pass it again next spring.

Two items not on the $5 million list: air conditioning for Cole and replacing the turf field at the high school.

Wilmarth said the bond would pay to reprogram the heating system at Cole to allow for some cooling. After the meeting, he explained that adding air conditioning to Cole would be a multi-million proposition but that by reprogramming the current system, it would allow for the building to cool off at night. As the system works now, warm is good, so if it’s 85 degrees by mid-afternoon but starts off in the 50s (as happened this week), the building heats that cool early morning air. As Wilmarth put it, “It’s fundamentally breaking the law of the system to blow in 50 degree air.”

The proposed system changes, then, would allow for the system to blow cooler air into the building.

Parent Lisa Schambers brought up the question of replacement of the high school turf field. There is no money in the bond for that (it is also not a RIDE-reimbursable expense). Schambers said she thought money had been set aside years ago to replace the field – estimated replacement is $1 million. Chairwoman Mark said there was no money set aside.

It had been the hope to put aside money to replace the turf when it was installed in 2010, as memorialized in the minutes to the Jan. 31, 2012 School Committee meeting, when then-Committeeman Jack Sommer “discussed the need for a reserve fund for the turf field.” However, there was never a restricted fund set aside for that purpose.

East Greenwich residents not already registered have until Oct. 6 to register to vote in the Nov. 5 election (if you moved since the last time you voted, you need to update your registration or re-register if you moved from another town). All voting for the special election (which includes only this question and a $4.5 sewer bond question) will take place at Swift Community Center. If you have any questions about your registration or voting, contact the Town Clerk’s office, (401) 886-8603.

Like the news you get here on East Greenwich News? Consider supporting it by making a donation! We are a tax exempt 501(c)(3) organization dedicated to keeping East Greenwich a well-informed community but we need reader support! Click on the Donate button below or send a check to EG News, 18 Prospect St., East Greenwich, RI 02818. Thanks.