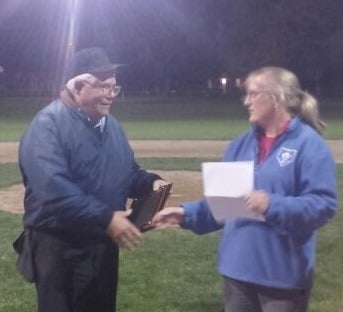 After 39 years as a member of the East Greenwich adult softball league – 25 of those years as commissioner – the great Frank Forster retired Wednesday night, following the final game of the fall season. Eleven Forty-Nine Restaurant won, by the way.

Forster grew up in East Greenwich and was an accomplished athlete while at East Greenwich High School. He graduated from Tufts University and received the Tusk Award and the Triple Letterman Award. After college, Forster returned to Rhode Island and had a successful teaching career and coached high school basketball and football. He also umpired high school softball games throughout the state.

After earning his umpire certification he became an umpire for the EG Adult Softball League and assigned the officials. In 1989, he was promoted to  league commissioner for both the men’s and women’s divisions. Forster was instrumental in expanding the league to include a fall ball season in 2010. Forster saw fathers and sons come through the league. Several of the players at Wednesday evening’s presentation that they were toddlers or not yet born when Forster started as the league commissioner.

More importantly, said EG Parks and Rec Director Cathy Bradley, Forster ensured that the league’s original intent of being a local recreational league, with the emphasis on “recreational” was sustained. He ran a fair, competitive, yet fun league where all levels of play were able to compete. In a tradition often performed by wrestlers who are retiring or who fought a hard battle, Forster left behind his umpiring shoes on home plate.

“Those are certainly some big shoes to fill,” Bradley said.