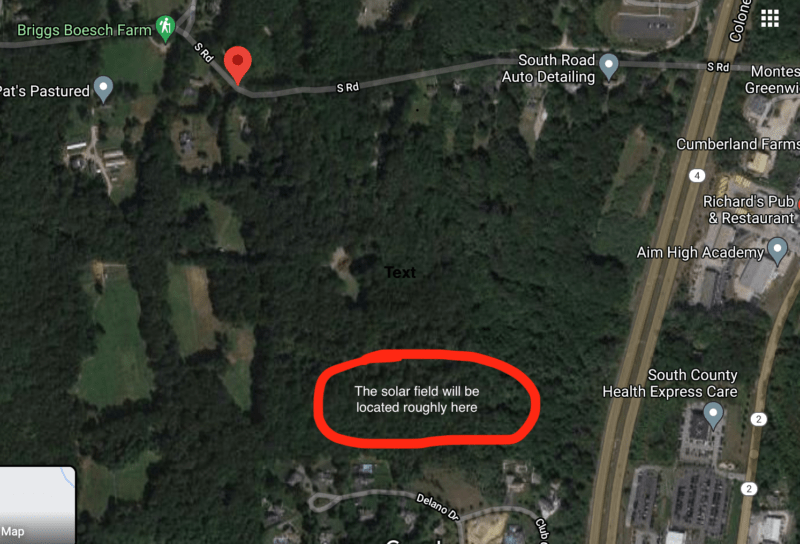 Despite noise and flooding concerns from neighbors, the Planning Board approved the master plan for a solar panel project near to South Road Wednesday night.

The project would have an expected useful life of between 30 to 35 years, and some nearby vegetation would need to be cleared for construction. Boston-based renewable energy developer Oak Square Partners proposed the project; they previously developed solar farms in Hopkinton, Richmond and Foster.

The board held a preliminary hearing on the project back in 2018, but some things changed about the design since then. Oak Square Partners’ legal counsel Jennifer Cervenka said that South Road Solar initially suggested access to the site could either be via an existing access easement to South Road or via direct access from Delano Drive in North Kingstown. But after some abutters said these access points could impact the neighborhood, Cervenka said the team is considering other options.

“After some time we were able to get approval from the Rhode Island Department of Transportation to use its parcel to have a both temporary construction and permanent access easement over its property, which basically runs off of South Road along Route 4 and connects at the northeastern corner of our property,” Cervenka said. “We have a draft easement that we’ve looked at, it’s not something that would be finalized until a later stage in the permitting process. We would construct essentially a 20-foot-wide driveway that would run through that property and connect with ours.”

Additionally, Cervenka explained that in 2018 they pitched the project as a community solar project. However, South Road Solar’s contract with Rhode Island’s Renewable Energy Growth Program is set to expire, so if the project is not completed by then the project might not be used entirely to power the community.

“That doesn’t mean that it won’t be a community solar project, we will continue to look for opportunities, but we can’t guarantee at this time that it will be that,” Cervenka said.

Planning Board Chairman Nate Ginsburg asked about noise levels coming from the project, to which Typadis said the solar panel inverters, which convert solar energy into electricity, should produce only about 35 to 45 dB of noise. He said that is about as much noise as a home fan or old dishwasher makes. Ginsburg also asked if the area’s slope was noticeable, and Typadis said it was gradual with only a few steep sections.

The board then allowed the public to share their thoughts on the project. Anthony Soscia, a South Road resident, said he feared that the project would cause a decrease in nearby property values. He and other commentators also worried that removing vegetation in the area for the project could harm wildlife and their habitats, or could cause runoff from the Hunt River watershed to flood nearby neighborhoods.

“There’s a natural stream that runs through the middle of what is going to be the solar farm during torrential rains,” Rich Giusti, a North Kingstown resident near the site said. “When the fields at Boesch Farms flood, that’s the natural path for it to go down and I’m very concerned because some of the houses took on water, and in our neighborhood about 10 to 12 years ago, during that major storm. And if that was obstructed in any way, it might just sit higher up and affect us in a negative way.”

Russo said that the slope of the solar panel site should limit the flooding in neighborhoods.

“It generally slopes through the middle of our site down to where that detention area is,” Russo said. “Not to say that there might not be some [flooding]. We’re showing two foot contours, there may be some small pockets that may be directed towards the abutting homes within the existing wooded area on that southern boundary but we are going to do some additional topographic survey to get some more detail on that.”

Abutters also voiced concerns regarding the project’s noise, both from its construction and its inverters.

“Noise definitely is a concern,” fellow resident Doug Ruggieri said. “I mean we can hear the hum of Route 4 now, nevermind when you start clearing that much acreage.”

In response, South Road Solar’s John Typadis said the firm could perform noise study with the help of a sound engineer.

All six of the planning board members that attended the meeting voted in favor of the project, which must earn two additional Planning Board approvals (preliminary and final) before construction would begin. The seventh member, Eric Jautaikis, was not in attendance.