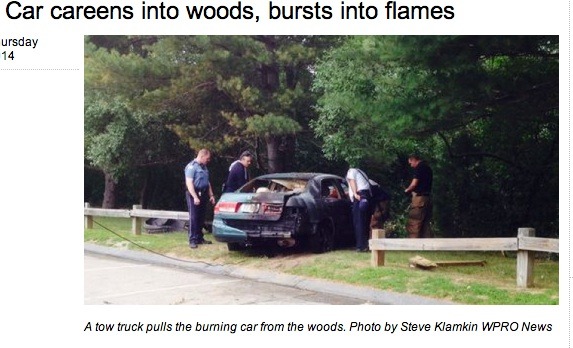 The car being pulled out of the woods by a tow truck, taken from wpro.com.

Three people, including one East Greenwich resident, rescued the driver of a burning car after he crashed into the woods next to the Showcase Cinemas on Division Street Thursday afternoon.

Lauren Costa, who was in a car with Sean Kasz, said they saw the man hit an SUV while driving on Division Street near Eleven Forty-Nine restaurant, then saw him swerve into the parking lot at Showcase Cinemas just after 1:10 p.m.

Costa said the driver was slumped over the steering wheel, so they followed the car into the parking lot and found it crashed 20 feet into the woods, with the engine still running and a fire starting under the trunk.

“The car started popping and really burning right as we got him out,” said Costa. “Sean was so afraid the door was going to be locked but thankfully it wasn’t.”

Costa said the airbag had deployed. The man was conscious by the time rescue arrived, but “banged up pretty good.”

In addition to Costa and Kasz, both of Coventry, Rich Hopkins of East Greenwich also helped with the rescue.

According to officials, both the man and the driver of the SUV he hit were taken by rescue to the hospital.