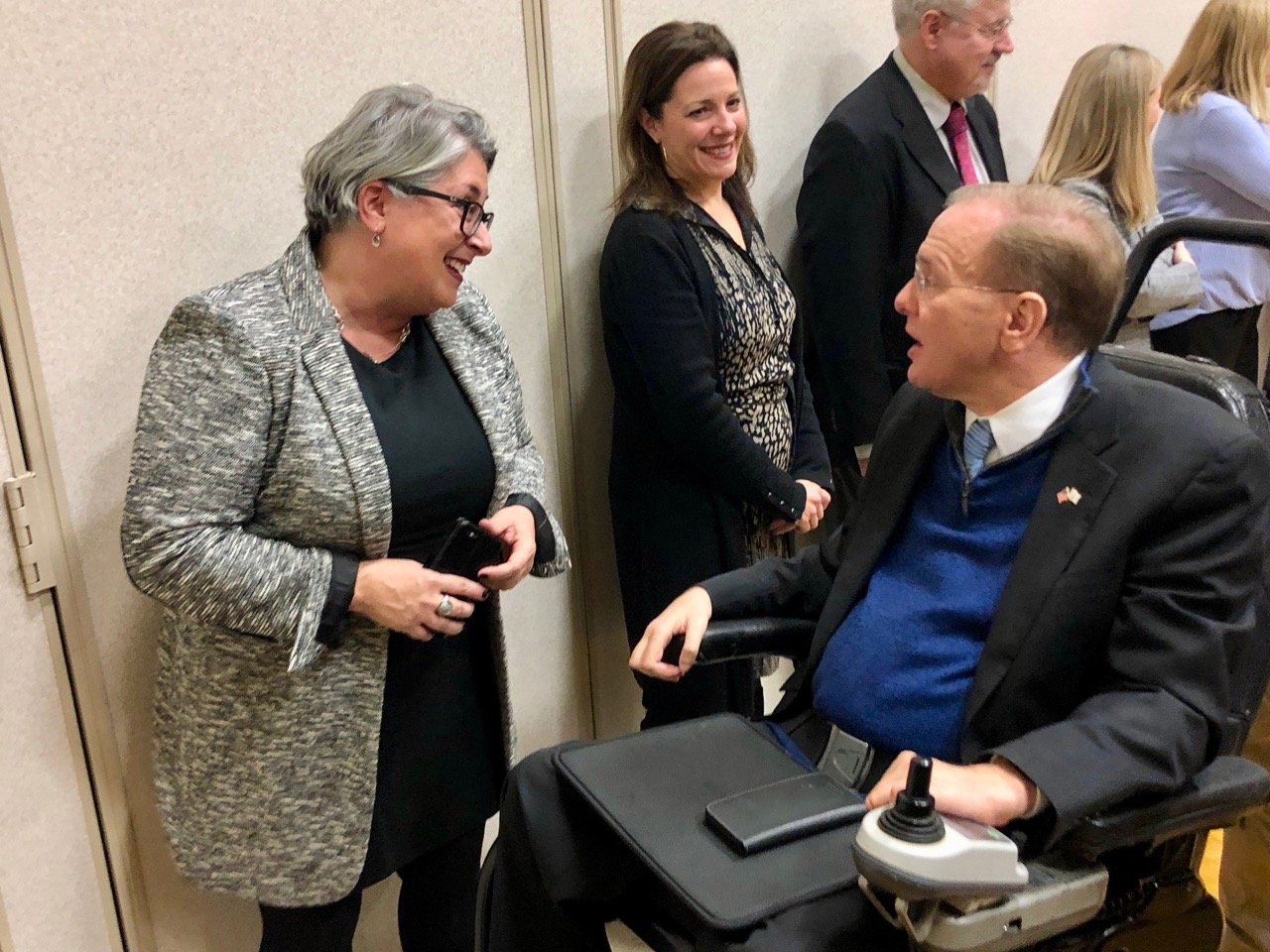 Above: Rep. James Langevin greets newly sworn in School Committeewoman Anne Musella at the town’s swearing in ceremony in December 2018.

James Langevin was only 36 when he was elected to Congress in 2000. Twenty years later, he’s the longtime House veteran facing 33-year-old Dylan Conley in the Democratic primary Sept. 8. 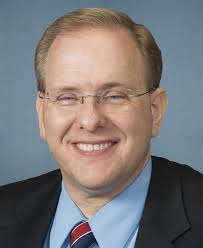 In a recent interview, Langevin said he was running for an 11th term because “I don’t feel the work is done yet.” In particular, he said, “there are too many people hurting right now because of this COVID crisis we’re in.”

Langevin said he knows states, cities, and towns are looking to Washington for more help to combat the economic calamity caused by the pandemic. And he said the Heroes Act passed by the House in May would have gone a long way toward easing the pain. But that legislation has not been taken up in the Senate. Right now, the Democrats have asked for $3.2 trillion in aid; Republicans have said the number should be $1 trillion.

“What about a $2 trillion package?” said Langevin. “I think that is a workable compromise. We should meet in the middle if that’s what it takes.”
Langevin defended his work in Congress, particularly with regard to legislation.

“Dylan Conley is talking as a person who does not know how Congress works,” Langevin said in response to Conley’s jibe that Langevin had only passed two individual bills in Congress in 20 years. “Members introduce individual bills but most of the time those bills get attached as an amendment of a much larger bill.”

Of his accomplishments, Langevin said he has focused on national security, specifically cybersecurity, career and technical education – ”to make sure our young people have the right skills when they graduate” – gun safety, environmental issues, stem-cell research, and disability rights.

Langevin, who served as Rhode Island Secretary of State before being elected to Congress, has also long had an interest in election security. This year’s been frustrating, he said, particularly with what President Trump has been saying about mail balloting, and with any delays at the Post Office due to internal changes there.

“It basically amounts to voter suppression,” he said, noting he was especially concerned about military service people overseas who rely on mail ballots.

Rhode Islanders who want to vote by mail should act quickly.

“As soon as you get your ballot in, fill it out and get it in the mail as soon as possible,” Langevin said. “Getting that vote in early is going to be key now more than ever.”

Langevin is the first quadriplegic to serve in Congress.

He said he was honored to be at the signing ceremony for the Affordable Care Act during President Barack Obama’s time in office.

“It’s been heartbreaking to see it weakened” under President Trump, he said. While he supports Medicare for All (he was a co-sponsor), Langevin doesn’t think “we’re going to get there all at once.”

He does support a “public option” – government-run health insurance that would compete against private insurers (something also supported by Democratic Presidential nominee Joe Biden).

Langevin said while he agrees with a lot of what’s in the “green new deal,” he did not sign it, saying it was a statement of principles, not a bill (and also noting Sen. Sheldon Whitehouse, who has made climate change a cornerstone of his Senate work, did not sign it either). He touted his work extending tax credits for wind energy and adding a provision to the National Defense Authorization Act calling for branches of the military to assess their top 10 bases most vulnerable to climate change.

“We need to get off fossil fuels. We should be focusing more on creating green jobs,” he said. “It was a mistake for Trump to pull us out of the Paris Climate Accord.”

Conley has accused Langevin of profiting off of recent stock purchases made shortly before Congressional action that caused those stock prices to increase.

“I’ve always complied with the letter and the spirit of the law with stocks I’ve invested in,” said Langevin. With regard to the stock trades Conley referred to, “those stock trades never happened. My financial advisor had recommended those stocks to me and I had approved them but later in the day I’d heard the Senate would be taking up legislation [that would help those companies] … I didn’t like the optics of that,” he said. “I told my advisor to void those sales.”

However, he said, the purchase and subsequent void were not reported properly and only the purchase was listed on Langevin’s financial filings.

“It has since been fixed,” he said. “I’ve long held individual stocks and I make an effort to avoid any appearance of inappropriate activity. I don’t invest on defense stocks,” for instance.

In addition to legislative work, Langevin said his other big job is helping constituents.

“You need to be a good listener, be accessible and responsive to your constituents,” he said. “I want people to come to us if they are having a problem with [things like] Social Security or veterans issues. Let us help cut through the red tape.”

He added, “I would like to continue to serve as Rhode Island’s congressman. I consider [the election process] a job interview every two years. I’ve never taken this for granted and never will.”