Above: The Wall of Honor at EGHS can be found in the hallway between the auditorium and the cafeteria. 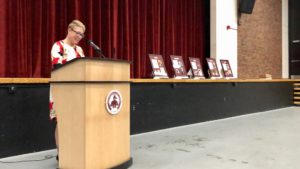 The East Greenwich High School Wall of Honor Committee has chosen four more people to be honored in an induction ceremony to be held in April 2021.

The pandemic forced the cancellation of the 2020 ceremony, so next spring there will be a ceremony combining both the 2020 and 2021 classes. Tentatively it will be held in the high school auditorium, but, if conditions warrant, it could be moved out to the football field, weather permitting.

Chosen for induction for 2021 are:

Felicia Piscopio Revens, who graduated from East Greenwich High in January 1980, was actively involved in Avenger sports and is the current owner of Felicia’s Coffee on Post Road.

Michael Dacey, EGHS Class of 1989, who also was active in sports for the Crimson and White, and, who currently runs Dacey Insurance on Main Street.

Mark Finn, Class of 1977 was an outstanding goalie on some outstanding Avenger hockey teams and later played at Cornell. He currently owns ad operates Finn’s Harborside down on Greenwich Cove.

They will be joining the 2020 Class, which includes:

Dennis Lynch, also Class of 1966, was good at basketball and golf, who ended up as chairman of Cardtronics, the world’s largest operator of ATMs.

Francis J. Pescosolido, M.D., Class of 1968, who started out as an expert in Child Development and Psychology and is currently the Clinical Associate Professor of Psychiatry at Brown University.

Mark Gee will be presented with the Appreciation Award for his activity in the town, on the Fire District Commission, the EG Town Council and as a state senator, among other activities.

It is not a Hall of Fame, though there are some members who would be in any Hall of Fame if that were the object. It honors people who have graduated (or see above) and who have gone on to success in life and can serve as a model and inspiration for current students. The committee tries to include people from various occupations, walks of life and volunteer activities. Value is placed on teachers, first responders and service people along with those mentioned above.