$2 Million Road Bond Would Help Town ‘Catch Up’ on Repairs 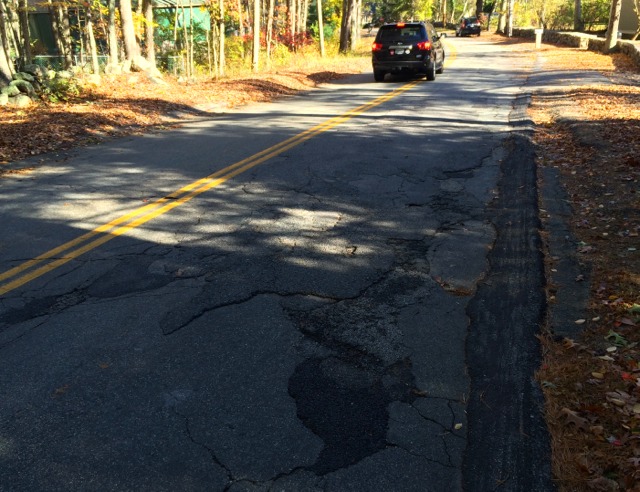 Joe Duarte hopes East Greenwich voters approve a $2 million road bond question on the Nov. 4 ballot (Question 11), but acknowledges that money won’t be enough to repair all the roads needing work in town. And won’t really even touch sidewalks.

“$2 million is going to give us some roads, a good chunk of roads,” he said last week. “Right behind that, I could probably come up with another $1 million worth of roads that also need attention.”

Town Council President Michael Isaacs said the council decided to go to the voters with the bond question because road maintenance took a hit during the economic downturn.

“We saw a loss in non-tax revenues,” he said last week. “As a result of that we cut back on operating and capital expenditures. One of the reasons we cut back on capital was so we could preserve programs – schools, senior meals – and as a consequence, road construction suffered.”

He added, “We thought that now was a good time. Other debt was starting to roll off and interest rates are at historical lows. If we’re going to borrow money, partly with our good bond rating, now is the time.”

The “other debt” Isaacs was referring to is the $6.7 million budgeted this year in debt service payments for, most significantly, the new Cole Middle School and other school construction, the new police station and renovations to Swift Community Center. That amount crested last year, at $6.8 million.

For Duarte, there’s a lot of work to be done. Duarte named Shippee Road as one of the most important roads to tackle.

“There are neighborhoods that are going to need a lot of attention and this is what we’re hoping to do with this bond. But $2 million is only going to get you so many roads,” he said. “If we could create some kind of a fund where, let’s say, we budgeted annually $300,000. If we don’t spend that one year, it would go into a sinking fund. Then we could conceivably take care of a lot of roads and keep up with our road infrastructure.”

He added, “The problem with roads is it’s an ongoing project. You can never stop paving roads. Roads that I paved when I first came in are already showing signs of deterioration and that’s 14 years ago.”

A residential road should last 15 to 20 years, he said. Some roads in town, however, are old paths that were widened over time and the results weren’t always optimal.

The town did repave Arrowhead Trail this year but not the way that was recommended for a full fix. That would have cost $400,000 to repave a road just over one fifth of a mile. The town repaved the road for $100,000.

Duarte couldn’t say if the bond would pay for sidewalk repairs.

“We need a program for sidewalks,” he said.

You can see a sample ballot here.