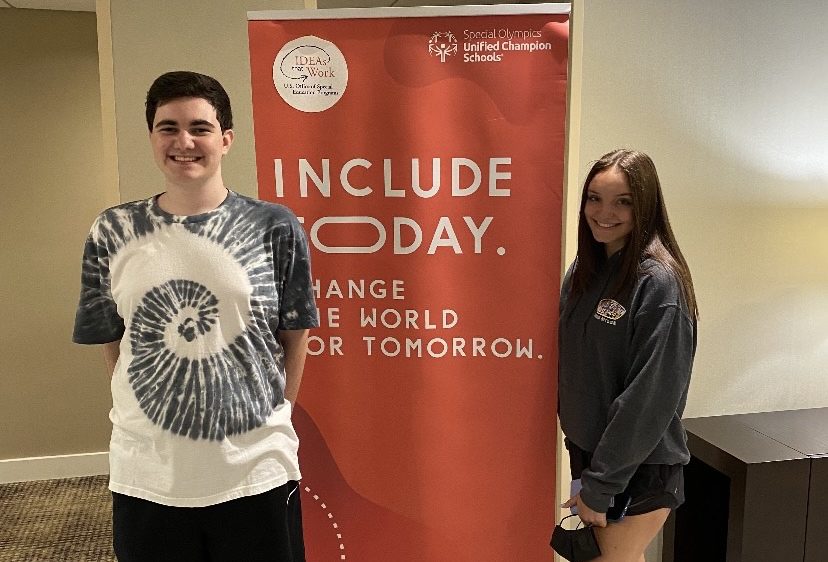 East Greenwich High School seniors Lexi Scott and Joe Gendron have been named U.S. Youth Ambassadors for Special Olympics this year, serving as advocates for the Special Olympics program and leading workshops across the country. The duo will even speak at the Special Olympics Unified Champion Schools National Convention this coming March – Unified Sports pair athletes with disabilities with typical peers as “partners.”

As volunteers for Special Olympics R.I., the pair first heard about it from the state board’s director of marketing and communications, Gerri Walter, who asked if they would be interested in applying. Adam Scott, a teacher at Archie R. Cole Middle School, a Unified coach and Lexi’s father, served as a mentor for the students.

“When we first found out we had been selected, I was shocked,” said Scott. “My dad even found out two days before me and he couldn’t tell me.”

Both Scott and Gendron have been part of the high school’s Unified Sports program since they were freshmen. Once school was back in session, Joe and Lexi talked with their Unified team about their plans for the year.

“One of our goals was to have a Unified game during advisory,” said Scott, to broaden the reach of Unified. Creating time during school for people to take part in Unified games is intended to get more students involved, with the idea that the more people participate in the program’s events, the more inclusive a school will become.

“We want to see more participation from partners,” said Gendron, “It’s amazing seeing more kids doing Unified Volleyball this fall because it’s a chance for a lot of people to take part in it.”

Scott agreed, saying, “I just want to see more inclusion with the kids that don’t come out of Mrs. Healy’s room,” she said, referring to Fran Healy, who teaches students with a higher level of disability. “Like I know even at lunch there are some kids that don’t really leave the classroom and I bet there are kids in our school that have never been in [the cafeteria].”

There is also potential to have a Unified Volleyball game be held as a replacement for the homecoming pep rally which is not happening this year due to COVID.

Congratulations to Lexi and Joe. We know their value here at EGHS – now the whole country will get to see that.