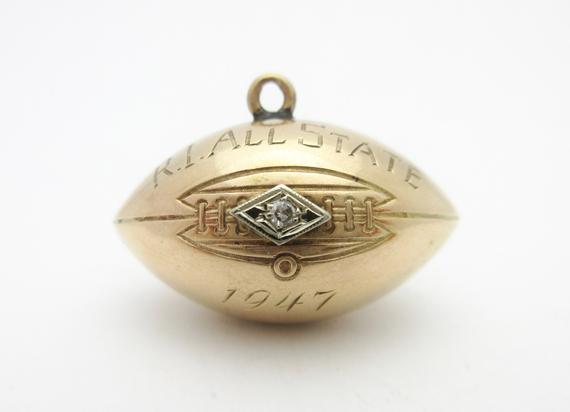 The club takes great pleasure in this night of presentations to the Best of the Best, which includes awards to both high school and college players, officials and others from all aspects of football in Rhode Island.

On the Divisional level, Joe Gilmartin,of North Kingstown, who also received the honor in 2015 (D2), was once again named Coach of the Year, this time for Division 1A. Jaylen Smith, hard-running Shea Raider running back, who is getting D1 attention, though only a junior, grabs the D1A Back of the Year. University of New Hampshire commit Dylan Poirier, also from NK’s Skippers, takes the Lineman of the Year in that division.

Charlie Bibeault of Woonsocket’s Villa Novans is the D2A Coach of the Year and his running back Emmanuel Gomes, a URI preferred walk on, is the choice for top back. Levon Dakessian of the East Greenwich Avengers is the choice for LOY in that division.

Former URI star DB, Coventry Knotty Oakers’ Stanley Dunbar, was the choice in D2B as its outstanding coach. Top scoring Tristan Turano of the Westerly Bulldogs is that division’s ace running back, while Big Brandon DiChaiaro of Burrillville’s Broncos is the Lineman.

D3 was the domain of Central Falls as the Warriors Coach, Back and Lineman all were named the best. They were Jeff Lapierre, Dutchie Arroyo and Jonathan Acosta.

It was the same in Chieftain country for D4 as Ponaganset HC Jim Cook, running back, Jeremy Stone and lineman, Matthew Ferreira took the top honors up north.

Nick Giorgio, former Cumberland, and, current Springfield College grid great, is being given the Pride of Rhode Island Award, presented to a former RI High School player who distinguishes himself academically and athletically at an out-of-state college.

Mitch Foresti, a longtime, veteran official in three sports, is being honored as the Lou Cimini Officiating Award winner.

Bruce Mastracchio is being honored with the Lawrence P. Gallogly Award, given for unselfish contribution to people and organizations in Rhode Island.

Tickets for the four-course prime-rib dinner are $40 and can be gotten by contacting Providence Gridiron Club President Robert Izzi at 378-4393 or at [email protected]. Between 250 and 300 people are expected at this prestigious affair so it would be wise to get your tickets now.