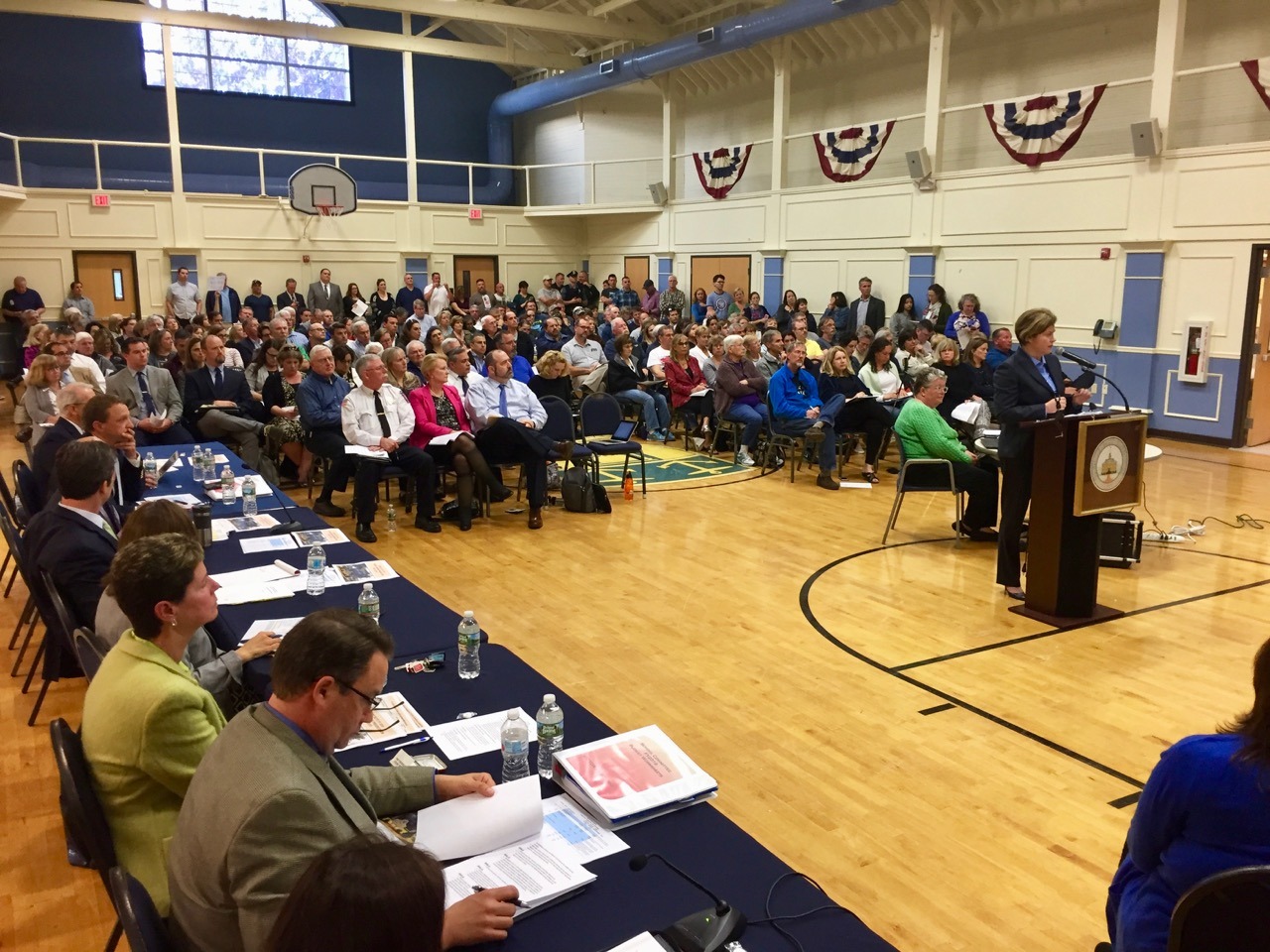 If was a familiar story at Monday night’s hearing on the fiscal year 2019 budget. If you shut your eyes, you could be back in June 2017, when the then-consultant and now town manager, Gayle Corrigan, outlined unsustainable labor contracts and pension benefits, raised the specter of financial collapse à la Central Falls.

“We cannot now raise taxes to pay our fiscal obligations. It happened. It happened in fiscal year ‘19.”

Part of that was by design.

Last year, the Town Council cut taxes by a total of $700,000 – even though that meant cutting capital spending and giving the schools about a third of what they had requested.

And the council was also aware a year ago – the public was not – that the town was facing a multi-million dollar settlement.

The payment, negotiated down to $1.7 million, is for the illegal imposition of impact fees on new commercial development by the former East Greenwich Fire District. When the district was merged with the town in 2013, the then Town Council stopped the collection of impact fees, but the practice had taken place for 10 years and in 2016, the state Supreme Court ruled against the town.

The payment is being taken out of the town’s fund balance this year. Corrigan said Monday the move could potentially threaten the town’s excellent bond rating – i.e. make future borrowing harder.

The effect of last year’s tax cut continues to reverberate.

Town Council President Sue Cienki has expressed no regret for the tax cut. Rather, she has spoken proudly of delivering the first tax cut in decades.

In 2019, according to Corrigan, a 4 percent increase would give the town $2.1 million in additional tax revenue.

So where is the rest of the $2.1 million going? A huge chunk is going for capital expenses – $1.1 million.

Corrigan also increased the firefighter overtime bill by $400,000, blaming the increase on a change in the contract that would increase the number of firefighters required per shift, contributing to higher overtime costs. It’s not clear why the overtime would increase that much – the staffing increase has been phased in over three years and overtime has increased by around $200,000 over the first two years of the phase in.

(In December, the town and the firefighters negotiated for two days to lower fire expenses. Both sides blame the other for the breakdown. Firefighters say they had an agreement that would have saved several hundred thousand dollars; town councilors say firefighters didn’t give enough. By law, the firefighters were not obligated to negotiate – their contract is good through fiscal year 2019.)

Another increase in the budget is the town’s debt service payments. After four years of steady decrease, the town’s debt payment is up by $300,000 in 2019, because the town needs to start paying on the road bond passed in 2017. The town’s total debt is budgeted at nearly $6 million next year.

“Maybe you didn’t time your debt payments correctly,” said Corrigan Monday night. In the past 10 years, voters approved town borrowing to build a new police station and a new middle school, cap an old landfill, renovate an old gymnasium into a community center and give the high school a facelift and new science labs, among other expenditures.

Those bond payments have been decreasing, despite the uptick next year, from a peak of nearly $7 million in 2014.

Corrigan did suggest places in the budget where money could be shifted to give more to the schools,

Including the $350,000 payment toward funding retiree benefits (known as OPEB, other post-employment benefits). OPEB payments are not yet mandated by the state the way pension benefits are.

During public comment, firefighter union president Bill Perry suggested taking $250,000 out of the firefighter overtime budget line, saying there was “no way” overtime would be $1.2 million next year.

Council President Sue Cienki said Monday night was the first of two budget hearings. No date has been announced for the second hearing, but the clock is ticking. By charter, the council must approve a budget by June 10.