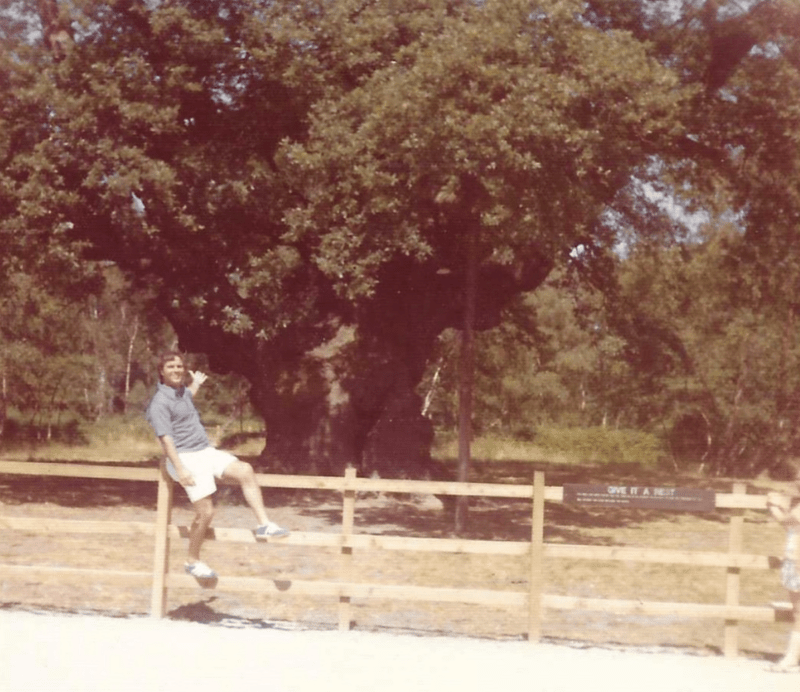 Above: Bruce in front of the Robin Hood tree in 1976, right before jumping the fence and climbing the tree.

In 1976 we, in the United States, were celebrating the 200th anniversary of our independence from Great Britain. But, instead of staying here to celebrate, my wife and I went to England. Bruce points to the to East Greenwich sign in London 1976.

Over there, they were celebrating that occasion from their point of view with white tents all over, especially by the Thames, with interesting artifacts and exhibits. In wandering around those exhibits I actually found a road sign that read ‘”To East Greenwich.” Seems there’s one of “Our Town” over there, the British knowing a good thing when they see it. I actually have a picture somewhere of me and the sign.

On July 4th, my wife, her sister and husband (who was stationed there in the Air Force, the reason for our three-week excursion) decided to go down to 10 Downing Street early in the morning. When we got there a crowd of 100 or so was already there but all were standing on this narrow sidewalk across the also narrow street from the Prime Minister’s residence.

“Oh, I’d like to have my picture taken in front of the door,” said my wife.

So, being always the dutiful husband, I left my spot and sauntered over to 10 Downing, where a Bobby (British police officer) was standing. He had a gun. We had always thought that Bobbies didn’t carry guns. Not so.

“Hey, old chap,” I said. “Think I can take a picture of my wife with you and the door?”   No answer. He just stood staring straight ahead.

Then the window to the right of the door (as you are looking at it) opened and three men stuck their collective heads out.

“Where are you from, bloke?” one of them asked. “From Massachusetts [lived in Millbury at time, teaching in Auburn].” You know, those guys who kicked your ass in 1776!” Elaine Mastracchio & the Bobby, with the member of the Horse Guard  who stomped his foot shortly after this picture was taken in the summer of 1976.

After some more banter back and forth I asked my question.

“I would like to have a picture of my wife in front of the door,” I went on. They assented and I brought my wife over. She stood next to the bobby, but then stepped up onto the step. The bobby became all agitated and she stepped down. I took the picture.

“What would happen if I touched that door,” I asked the three men in the window.

“Touch it and find out,” they answered.

So, I stepped around the bobby and grabbed the handle of the door. Next thing I knew, the bobby had jumped on my back, the door flew open and I slid on my stomach with the bobby on top right into the foyer of the Prime Minister’s residence.

The three men from the window came out laughing. In the meantime, my sister-in-law and her husband had joined my wife outside and the three men invited us in.

It turned out the Prime Minister was not in residence at the time but vacationing at the PM’s country estate, Chequers. That’s why they and their usual restrictions were so loose.

The three men had us sign the guest book and I signed right underneath a prince from Saudi Arabia.

After exchanging pleasantries and small talk, we left.

Later, at Buckingham Palace, we had a similar experience when my wife wanted to have her picture taken with one of the red coated, bear-hatted guards. As I snapped the picture, he raised his leg and stamped it down to pivot and do his marching thing, my wife jumped and squealed, and surprisingly as they are not supposed to change expression, this one actually broke into a laugh.

The next day when we went to see the horse guards, guess who stopped his horse next to us? The same guard as from the day before at the guard shack. Again when he saw us he broke into a smile. Egged on by me, I suppose, as I was pointing to my wife and stomping my foot.

But our England adventures did NOT end there.

The next day we headed north with a destination of Scotland in our plans. On the way we stopped at Sherwood Forest. Robin Hood being one of my boyhood heroes,

I was giddy about being in the same place where he had enjoyed his adventures outwitting the Sheriff of Nottingham.

Then I saw it! The Merry Man tree! In the movie with Errol Flynn, the whole of Robin’s troupe hides out in it as the Sheriff approaches and of course jump down on the unsuspecting posse.

I had to climb it! There was a fence encircling and seeing no signs saying to the contrary, I stepped up on the fence, grabbed a branch and kipped up into the tree. I let my imagination run wild of course with my wife admonishing me from below. When I had gotten my thrill I climbed down. Of course, as I did, the only sign around came into view, which said, “Do NOT Climb This Tree!”

Honestly I didn’t see it – LOL – and was a little chagrined.

We then proceeded on to the England-Scotland border, where we stayed in a bed-and-breakfast for the night. After unpacking, my wife wanted to rest so I ambled downstairs to the living room. Our host was there watching British professional wrestling. Being a kayfabe fan myself and knowing some of the British wrestlers, I engaged him in conversation.

“What is there to do around here?” I asked. “Looks like we are in the middle of nowhere.”

“Well,” he answered, “if you go up this road so many miles it will bring you to Berwyck on the Tweed. They have excellent fish-and-chips there. Tour the town, look around and take your time. Then head back here but plan to stop in the town of Duns around midnight for The Reivers Festival. It is quite the thing.”

That is exactly what we did. Berwick was nice. The F&C came wrapped in newspaper. We got to Duns about 11 p.m. There was a carnival there and people all lined up for a midnight parade with bagpipes, torches and all. The festival celebrated the Reivers (raiders) who fought in the border wars between England and Scotland. The parade was impressive. the sounds of the ‘pipes, the torches and all. We were glad for our host’s tip. It added to the trip.

I ended up standing next to this woman on the side of the street waiting for the parade.

“Guess where I was yesterday?” I said to her in an attempt to be friendly.

“Well, in the Prime Minister’s house at 10 Downing,” I replied, puffing up some.

“Gor blimey, you be full of bullshit,” she said.

“Well, I’ve got pictures,” I retorted.

Funny thing those pics did not come out so well as the overcast, misty London fog worked against a good one.

But, you can always check the Prime Minister’s guest book!

*There is more but I will save for another time. Meanwhile, life is what you make it. Anyone can be ordinary. Be different but be better!